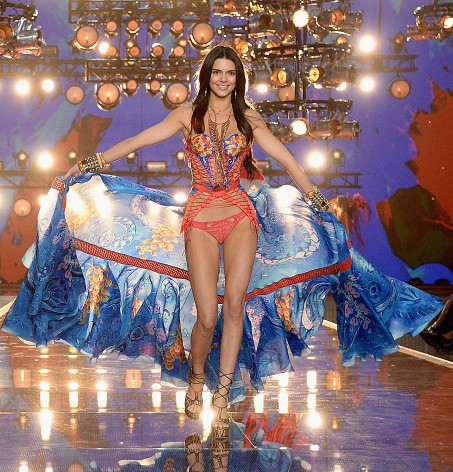 It’s the most wonderful time of the year, meaning tonight’s the night you can see all your favorite straight size models slinking down the runway in feathery wings and bras that cost more than everything you own combined at the annual Victoria’s Secret Fashion Show. They still haven’t allowed curvier models into the lingerie party, so we’re not thrilled about it, but Stephen Colbert is.

Last night, Colbert hosted three Angels– Adriana Lima, Behati Prinsloo, and Taylor Hill— on The Late Show, and let’s just say it wasn’t so he could sit down and chat with them about their diamond encrusted thongs and what it’s actually like to breathe the same air as Kendall Jenner. Instead, Colbert decided it would be really fun for them to do, as he says, “what we really want to see Victoria’s Secret Angels do.” What’s that, you ask? Eat a pile of buffalo wings, of course. The wing showdown is meant in good fun, but it’s not that funny, nor is it original by any means. In fact, it’s pretty problematic.

This Colbert skit is like mild skinny shaming and every dude’s sexual fantasy all wrapped into one fun television clip. Let’s explore it a bit. We already know that telling a thin model to “eat a cheeseburger” is like telling anyone with hips to lay off the cheesecake. See our interview with Victoria’s Secret model Sara Sampaio on being told to eat burgers here. It’s hurtful, and it’s body shaming. Telling these hot, talented babes that all we really want in life is to see them smeared in buffalo sauce isn’t much different. It’s like, hey, forget your laundry list of accomplishments, today you’re on this show to prove to the world that models can consume something other than leafy greens. And would this little stunt have ever taken place had “curve” models been allowed to wear the angel wings? Probably not because of all the mean-spirited Interneting that would ensue.

Skinny shaming aside, we’re sure it is every guy’s dream to see a top model be retable by going to town on some wings. We get that they’re models and willingly walk half-naked down a runway for a living, but sexualizing these models with hot wings in a public talk show forum is like a live streaming Carl’s Jr. commercial. We’re not laughing at that either, Colbert.

Sure, the Angels looked like they were having a grand ‘ole time and enjoying the chicken Colbert gifted them (though concerned whether the wings were organic or more of the TGI Friday’s variety,) but having hot model chicks eating things for the public’s supposed pleasure or concern isn’t revolutionary or hilarious. It sends the message that it’s okay to tell women what and how much they should be eating, and it also makes the women look like pieces of meat on a Colbert platter. But cheers to Buffalo Wild Wings for finally being relevant.

Tags: skinny shaming
About the Author