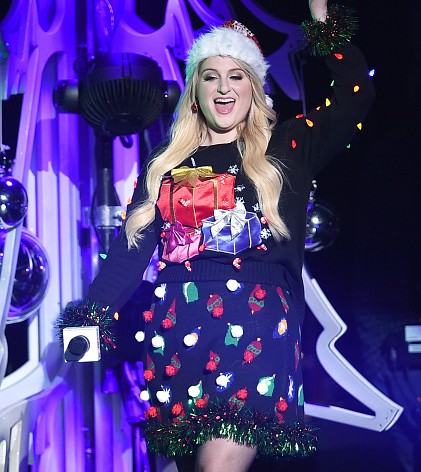 The 2016 Grammy nominations were announced this morning, and to no one’s surprise there’s a lot of T-Swift and Drake recognition, so throw the confetti here if you’re into that. There was also some love for curvy girl Meghan Trainor for the Best New Artist award. This particular nomination has gotten people questioning life, and not just because her top hit “All About That Bass” was absolutely one of the most annoying tunes to get stuck in our heads this year.

Some people on Twitter think it’s abominable that a “body shamer” like Trainor could get nominated for such a prestigious award. @lilwaynker said: “if anti-feminist, body shaming, problematic meghan trainor wins a single grammy i will be severely disappointed.” @niallscents wrote: “y’all pray for Grammy’s, ain’t much wrong with it, they just nominated a body shaming loser instead of real talented guys.” And @fairytaleofnjh chimed in: “Meghan trainor literally wrote a song body shaming slimmer women, how on earth does she deserve a Grammy.” Yikes.

Apparently “All About That Bass” is body shaming because, aside from singing about how much she loves her curves, Trainor spits out some lines like, “You know I won’t be no stick-figure, silicone Barbie doll” and “I’m bringing booty back, go ahead and tell them skinny b*tches.” Sure, those zings probably could have used some more thought by the fireside with a cup of hot cocoa. We all know that skinny shaming is a real thing, and referring to anyone as a stick figure doesn’t make you worthy of a bouquet of lilies. But the “body shamer” label for Trainor seems harsh.

She didn’t write “All About That Bass” in order to make thin women feel bad about themselves. She wrote it to empower and celebrate women with curves who rarely get half a bone thrown their way.  When every movie, magazine, and internet article promotes the idea that thinner is better, Trainor’s hopping up on a 2014 Macy’s Thanksgiving Day float to say hey, curvy girls deserve love, too, and that’s cool. Admirable, even, when she had to have known the backlash she would face. Writing her off as a “body shamer” and failing to acknowledge the solid message her song actually promotes for the majority of women is harsh.

We’re not saying we’ll ever throw her a Grammy party, but we’re team Trainor on this one.

Got beef with Trainor? Let us know in the comments.

Tags: meghan trainor
About the Author