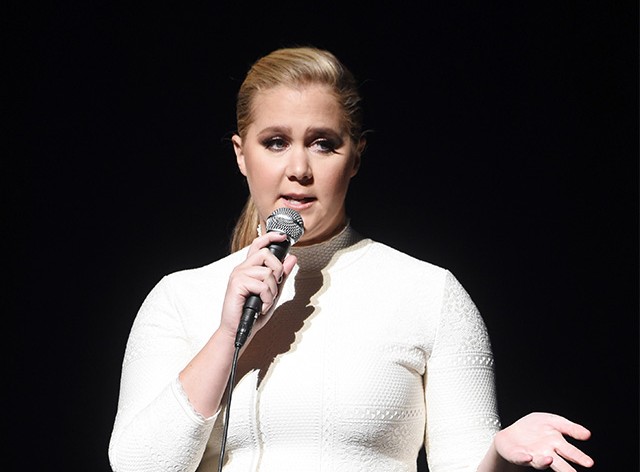 The annual Pirelli calendar– you know, that exclusive, glossy high fashun calendar featuring mostly A-list female models in the buff, had a major change in tune for the coming calendar year. The 2016 Pirelli calendar, shot by iconic Annie Leibovitz,  features “women of achievement” like Tavi Gevinson and straight-shooter voice of reason Fran Lebowitz. The other significant difference in this year’s calendar is that Pirelli has traded in the nudity and raunch for–surprise– women in clothes. Aside from Serena Williams’ muscular bare back, Amy Schumer, the girl who can rock a canary yellow hoodie, is the only model to pose in a full-frontal topless photo in the 2016 calendar.

Schumer’s topless photo is supposed to be a joke that she didn’t get this year’s conservative memo, but her picture is an eye cleanse in an industry that has consistently ignored bodies with curves. Pirelli has a long track record of giving calendar space to straight-size high fashion models such as Sienna Miller and Naomi Campbell. Though Pirelli featured model Candice Huffine in last year’s calendar, which was a definite score for humanity, Amy’s topless photo feels like the ultimate victory.

Amy, one of those few celebrities with curves who it’s cool to like, has been open and honest about her body image struggles in the past. It’s an important deal that her bare stomach is the only one to grace an entire month in fashion’s elitist calendar. It’s the ultimate screw you to anyone in the fashion industry who’s ever said that flat stomachs are the only ones worthy of crop tops. To have Schumer, someone who is no stranger to the media scrutinizing her body, posted up nearly naked on a stool with a coffee cup in hand with a ‘Yeah… and?’ look on her face gives us goosebumps.

Get a load of the truckload of support her naked bod is getting.

@amyschumer @annieleibovitz thank you. I’m really tired of hating my body and feeling like I’m unlovable.