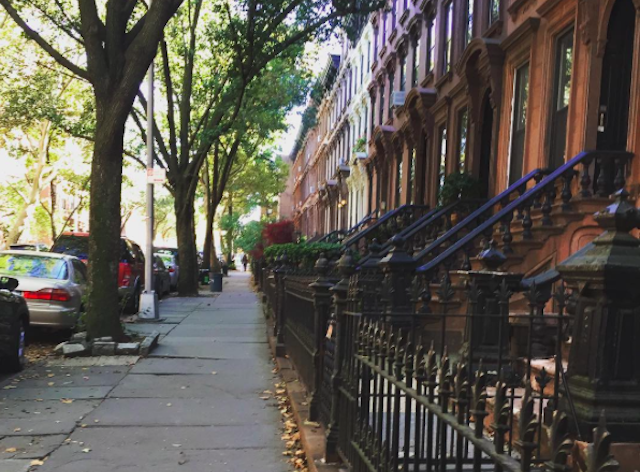 I’m a single, 24-year-old female living in Brooklyn. When I tell people that, they automatically assume I live in some studio nestled in a run-down Hipsterville warehouse that smells like an after hours old elementary school cafeteria. For people who don’t know much about New York, that’s all Brooklyn is. It’s Edison bulbs hanging from the ceiling of a bar serving only craft beer. It’s fancy strips of bacon, Brawny man beards, and art that looks like a pack of paint-covered squirrels let loose on a blank canvas. It’s kids in their twenties writing poetry, drinking Stumptown, smoking cigs, and being insanely out of touch with reality but totally in touch with their feelings.

This is not the Brooklyn that I call home.  I’m not a hipster. I don’t have tattoo sleeves, I don’t own acid wash jeans, and I know little to nothing about coffee or beer (all requirements of being relevant in Bushwick or similarly hip and gentrified neighborhoods). I live in the less cool, family-oriented section of Brooklyn. Though I love living here—it’s convenient, close to all the major subway lines, safe, and generally affordable by NYC standards—most days I do wonder if I’m the only young, single girl living on this kid-infested side of Brooklyn. People who don’t live here avoid it at all costs or forget that it exists. On the edge of Prospect Heights, a neighborhood whose only notable claim is the eyesore that is the Barclays Center, and Park Slope, an architecturally beautiful neighborhood accurately first introduced to me by a local as the ‘Stroller Capital of America’, is me. No live-in boyfriend. No toddler strapped to my back like something out of a Rick Owens show. Just me and my two cats Truman and Luna.

My friends living in neighborhoods in the city where a common question isn’t, “Can we see the kids’ menu?” think it’s strange that I’m living alone in an area that’s notoriously a family zone. Though I love living here—it’s convenient, close to all the major subway lines, safe, and generally affordable by NYC standards—most days I do wonder if I’m the only young, single girl living on this kid-infested side of Brooklyn.

Before moving to this part of Brooklyn in April, I lived in a fairly busy section of midtown Manhattan. I never felt unusual or out of place doing things by myself. Coffee shops, restaurants, movie theaters, you name it. I went there alone. But here, it feels like everybody’s got somebody. If it’s not a family of three, it’s a significant other at the very least to pretend not to be annoyed by at brunch, and I’m just the weird girl in the corner dining solo with a book in hand.

It’s truly impossible to escape the kids here, especially on the weekends. While the biggest threat when walking down the sidewalks of Manhattan is accidentally hitting a grumpy woman with your purse, navigating the sidewalks of family Brooklyn is an entirely different ballgame. Strollers. Everywhere. There should be a stroller lane or, at the very least, a law requiring all stroller pushers to remain to the right-hand side of the sidewalk, in a single file line. There have been one-too-many times when I’ve almost lost my feet to the wheels of some child-bearing mobile. I’ve shot a death glare in the direction of a woman (or even a man) with a stroller in my way and gotten a glare in return that was so terrifying that seemed to communicate ‘You have no idea what it’s like to operate a stroller.’ And they’re right, I don’t have a clue.

Just the other day, I went to Starbucks (yes, they do exist in Brooklyn) to use the Wifi. I thought it would be a decently quiet place to get some work done on a Wednesday afternoon. I should’ve known when I saw three strollers parked beneath the “Stroller Parking” sign (true story) that I should turn around. About fifteen minutes into my work session, an infant let out the most ear-piercing shrieks, drowning out the melody of an Earth, Wind, and Fire song. If that wasn’t reason enough to pack up my things and leave, a kid behind me started whining to his mom about cake pops. Can we get a soundproof section of Starbucks to throw the kids in, please?

And if strollers aren’t enough to give you anxiety over losing an appendage, these same cake pop-devouring kids who have outgrown the comfort of strollers have an even more terrifying mode of transportation to hop on once they’re high off of sugar: Razor scooters. Maybe I’m out of touch with what’s ‘cool’ for kids these days, but I thought the scooter craze died around the same time that The Ashlee Simpson Show was unfortunately on television. I’m here to tell you that the Razor business is still booming in this part of America. Maybe because I’m just a bitter single girl, but I cringe when I see a kid flying down the sidewalk on a scooter.

On weekends, it’s like Noah’s ark over here. Those not using their hands to ensure their kids don’t jump out in front of a moving bus place their idle hands in the sweaty palms of their significant others. I always find myself resisting the urge to karate chop their ‘til-death-do-us-part grip that prevents those of us not in the mood to linger on the sidewalks from passing.

I know I sound bitter about the Full House level of love that exists in my neighborhood. It’s forced me to realize I’m afraid that I might not ever have someone to take up too much space on the sidewalk with. I’ve always prided myself on being a fiercely independent person. I’ve never felt like I needed a man in my life to validate me, to go grocery shopping with, to scour the aisles of Barnes and Noble with. But suddenly, with the almost daily reminder from those around me that I have no one to return home to, I find myself wanting someone to go to Home Depot with, to do the dishes with. All the things that I used to never give much thought to because I didn’t mind being single.

I’m also realizing that there’s a strong chance kids won’t be in my future. My whole life, I’ve been pretty ambivalent towards kids, never quite sure of the answer to the big, “Do you want kids someday?” question. I had convinced myself that, by the time I reached my mid-twenties, I would probably love kids.  Now, I’m learning to accept that I have no interest in strollers, scooters, shrill cries in Starbucks, or fossilized applesauce on the sleeve of my favorite sweatshirt. I don’t have that strong desire to start my own family, which is terrifying for me to acknowledge because I don’t know what I’ll tell people.

Should I move to a neighborhood where seeing guys my age without their hands sewn to the hand of their significant other doesn’t feel similar to spotting a unicorn? Should I try to be more like the twenty-four-year-old in Brooklyn that Lena Dunham thinks I should be? I’m voting no. As I complain about the unlawful amount of kids and the nauseating couples around me, I really do like it here. I like my Sunday morning café, I like the friendly lady at the laundromat across the street. I like being able to jog through Prospect Park in the evenings. I like not paying an arm and a leg to live in a room without windows and telling myself it’s “hip.”

“You can’t have it all,” my mom always tells me.  And I know that’s true, which is why I’ll renew my lease come April 1. I’ll remain the young and awkward outsider in a place that I like and hope that someday (soon) I’ll find someone who also sits alone on Sunday mornings.