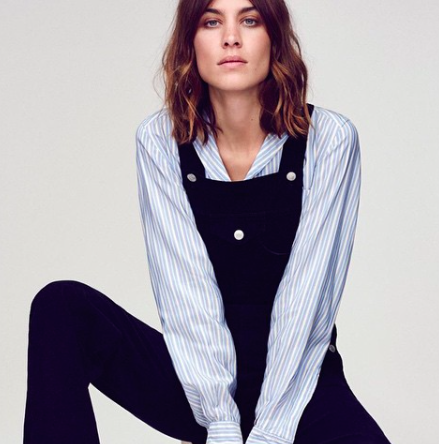 Alexa Chung Doesn’t Wear Bodycon Because She Wants to Be Taken Seriously
by Eliza Dillard | November 27, 2015 at 10:44 AM

There’s no denying that Alexa Chung , British babe we would kill to get a pint with on a Friday night constantly kills it in the style department no matter what denim or fuzzy thing she decides to throw on.

And Chung recently opened up to ELLE UK about her tendencies to go for ultra-fashionable office wear, floor-length frocks, and oversized sweaters instead of slinky sheer things you might see on Gwen Stefani or some of your other favorite fashion babes. On her style, Chung said:

“I feel uncomfortable in anything tight or body-con. Anything sexy, I don’t feel myself in. I don’t know what the psychology behind that is. Maybe I’m constantly fighting for people to listen to what I have to say, so it seems undermining to look too girlie or frivolous. I think that’s it. I still have my version of sexy. I’ve always dated dudes who think how I look is sexy anyway. A roll-neck and some flat shoes is about as good as it gets.”

Because we all know revealing we that have boobs or a butt immediately takes away any shot we had at being viewed as serious humans. We’d love to think that the mere fact that she is ALEXA CHUNG, the fairy godmother of all things fashun, should be enough to get people to bow at her loafers, but that’s not the fun world we live in.

Whatever the reason behind all those dungarees, we support Alexa’s version of sexy and would hop in line to shine those self-serious loafers any day.

Tags: Alexa Chung
About the Author