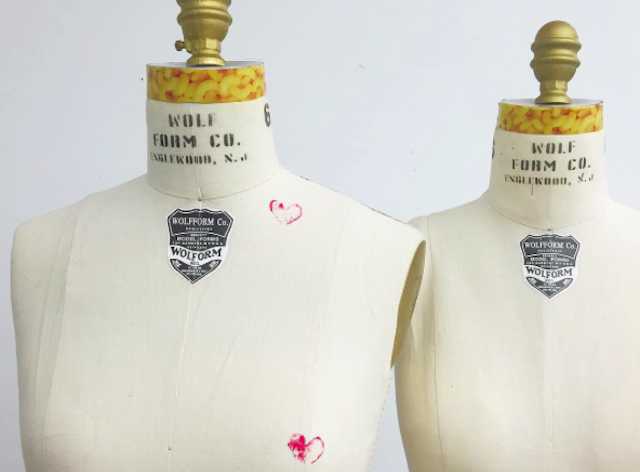 Why Getting My Master’s in Fashion Was Actually Really Rigorous
by Eliza Dillard | November 25, 2015 at 8:33 AM

I’m not an artsy person by any means. I can barely draw a stick figure, much less a gown for someone to put on their body. I got my master’s degree in fashion studies from Parsons but, despite what most people think, that doesn’t mean that I spent years of my life slaving over a sewing machine.  I don’t even know how to sew (though it’s up there on my list of things I want to learn how to do, like French braiding.) A lot of people don’t realize that there is more to going to fashion school than just fashion design and the business end of fashion.

Fashion is a legitimate area of academic study (gasp.) I certainly had no idea until I was eavesdropping on a conversation in a boutique in North Carolina and heard a girl talking about this magical program that allowed you to have informed discussions on fashion and society without possessing any artistic capabilities whatsoever. I wanted to go to there, as Liz Lemon would say.

First, it’s crucial that I explain what the fashion studies field is all about. It’s an interdisciplinary field that takes theories from cultural studies, anthropology, and sociology (among others) to critically consider how clothing is a reflection of society and who we are personally, of the relationships people have with their clothing, and how fashion plays a vital role in our every day lives. It’s more than just the clothes a person puts on their body, it’s about the body itself. From analyzing the rips, holes, stains, and sweat marks on a vintage Yves Saint Laurent blazer from the Parsons archives collection to interviewing older women about their relationships with their clothing, I immersed myself into the lesser-known areas of fashion.

Fashion gets a bad reputation for being frivolous. People who take an interest in it are often cast off as being materialistic, vain, snobbish or, the most annoying, dumb. For the first few months of my program, I was embarrassed when I told people what I was studying for fear that they’d think I was one of those girls who cared more about who was walking down the Chanel runway than who was running for president. I wasn’t one of those girls, and my desire to study fashion didn’t spawn from some need to always be trendy enough to get snapped for somebody’s street style story. My interest was deeper than that. I wanted to be able to have informed, critical discussions about clothing. I wanted to be able to think deeply about things like cultural appropriation and industry exclusion and the root of these problems. I didn’t have a set career goal in mind but always assumed I would end up in the media or academia.

But if I had a quarter for every time a friend, family member, or random person at a bar said, “It must be nice to talk about clothes all day” or “So, do you just look at pictures of dresses in class?” when I was at Parsons, I’d have enough money to pay my rent for a year.

While some friends and family members assumed I was skimming the pages of Vogue every night as my homework, I was actually reading Judith Butler’s Gender Trouble, Michel Foucault’s Discipline and Punish, or Stuart Hall’s thoughts in Questions of Cultural Identity. There were, of course, times when we did look at pictures of dresses or other sparkly garments to discuss their histories. But more frequent were the ample discussions of race, class, identity, culture, body image, sexuality, gender roles, and sustainability, just to skim the surface. These are all areas of discussion that people are loosely aware relate to fashion but rarely associate with a fashion program.

While a lot of people think (and I know I was one of them pre-Parsons) that fashion schools are filled with girls decked out head-to-toe in designer threads, that’s not entirely the case. Though you will definitely see those people, it’s more common to see people wearing brand ambiguous clothing. Flowy black garbs are definitely a hit. In my own classrooms, we had some ultra-stylish people, but we also had people who didn’t label themselves as fashionable at all. We had people from all around the globe who came from various backgrounds, like my friend Eda from Istanbul who studied anthropology and psychology, Erin from Canada who had a background in media studies, and Erika who studied history and literature at Harvard.

A master’s in fashion studies equips you for careers in the media, theater, museum archives, the classroom and, of course, the industry itself. By studying fashion with a critical eye, I started to pick up on things that I never would have before, like fashion media’s tendencies to reinforce negative stereotypes of aging with phrases such as “How to Dress Well For Your Age” or “How to Look Good Regardless of Age.”  It was an eye-opening experience that caused me to realize that I had been brainwashed by the media into thinking that there was a certain way I was supposed to look and there was an “acceptable” way for me to dress. That every decision I made to alter my physical appearance in any way was somehow connected to this streamlined ideal of beauty that I had in my head– an ideal that I obtained from reading magazines, watching television and movies, and looking at photos on the Internet. It all seems so obvious to me now, but studying fashion caused me to step back and really reflect on how I had been affected by the industry and how I wanted to help change the industry through my own research and writing.

Above all,  though, studying fashion reinforced what I already knew: there’s so much more to fashion than what meets the eye, and the same goes for those who study it.