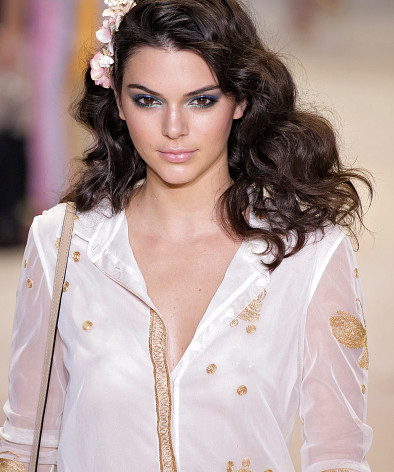 Since I first watched Holiday in the Sun in 2001, I have aspired to get Olsen-level wavy hair. Actually, I’ve really just aspired to be an Olsen, but that’s another story.

When I was recently scrolling through Kendall Jenner’s new app/website that I embarrassingly subscribed to, I saw that she was dishing out advice on how to get her wavy Diane von Furstenberg ‘do. Though her waves aren’t quite as effortlessly cool as Mary Kate or Ashley’s at Atlantis, Kendall’s DVF hair was pretty on point. I decided to try out her tutorial so you wouldn’t have to.

I had pretty low expectations for this experiment because my hair is notorious for being uncooperative. When I want it to curl, it stays stick straight. When I want it to be stick straight, it decides to frizz up like a Pomeranian. I assumed if I wanted to flaunt Kendall fabulous hair, my hair would fail me, though I had a slight hope that maybe there was something in this five-step tutorial that would give me my dream wave.

So, after washing my hair with TRESemmé Perfectly un(Done) shampoo and conditioner , I used a blow dryer to take out some of the moisture from my hair and create a “dramatic side part” (I’m not always this grumpy looking – only when I have to take selfies).

Then, I put in TRESemmé Wave Gel  (the tutorial suggests this alternative, but I already had the wave gel at home) and TRESemmé Make Waves shine enhancing cream endorsed by Kendall on 2-inch sections of my hair. I went pretty light on the product since I didn’t want to have crunchy waves, which might have been a mistake.

I then twisted these sections into small, messy buns around my head. This was really hard for me because I’m not entirely sure how much hair is a 2-inch section of hair, and I’m also really bad at doing anything to my hair that requires a hair elastic. The tutorial didn’t include photos, but I’m assuming this isn’t how it’s supposed to look.

I couldn’t make this look less glamorous if I tried.

After doing this to my whole head, I put the hairdryer on each bun until they were dry. Once each bun was done toasting, it was finally time to let down the waves!

The results were…disappointing.  I’d say this soft wave look is more Olsen twin post-swimming with dolphins and less Kendall strutting in angelic DVF threads. I expected to see more vavavoom. Instead, I got this very soft, very subtle wave (which I kind of like, though it pales in comparison to Kendall’s bouncing hair.)

After that, you’re supposed to hit it with a little TRESemmé hairspray, clip in a flower, and be off on your merry little way. Obviously, I didn’t do either because I went straight to bed after because YOLO is my middle name.

Conclusion: Kendall’s tutorial gave me some soft waves but nothing like what she rocked on the runway. Maybe it’s just my hair. Maybe I f*cked this one up with my messy bun twist technique. But I didn’t feel close to DVF runway ready with this hairstyle.