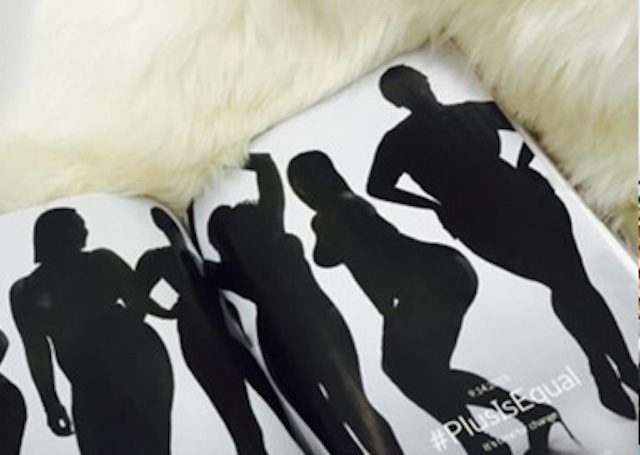 It’s Time to Stop Giving the Fashion Industry the Benefit of the Doubt
by Eliza Dillard | September 11, 2015 at 11:31 AM

By now, you probably know that, out of the 832 pages of Vogue‘s September fashion textbook, only two pages featured women with curves. These silhouettes with hips were in an advertisement for Lane Bryant and not actually models casted by Vogue itself because, of course. If this can be viewed as an accomplishment, it’s a lousy one at best.

It’s laughable if Vogue felt like they were doing curvy women a solid by weaving this ad in their glossy pages, but made no other attempt to include models who represent the majority of the women in America on their swanky photoshoots.

In a recent interview with Mashable, Straight/Curve director Jenny McQuaile and producer Jessica Lewis said that the ad in Vogue should be seen as a small accomplishment, though, and not a reason to knock September issues off the shelves. “There was a time when you wouldn’t dream of even seeing a plus-size model in an ad in the September issue of Vogue,” McQuaile says.

While it’s easy to understand where McQuaile and Lewis are coming from, “accomplishment” still feels like a strong word to use. Straight/Curve, their documentary exposing the hardships “plus-size” models face in the fashion industry, is a true accomplishment for women. Vogue‘s September ad is just a sad excuse for trying to look like they aren’t completely oblivious to the fact that most women aren’t a double zero and routinely vacation in Cannes.

The number of chicks with hips represented in fashion is continuously disheartening, like when 11 out of 707 models in fashion campaigns are “plus-size.”  It’s not enough to just throw a few curvy chicks a bone every now and then. We need consistent and quality numbers, dammit.

I’m over feeling complacent with these small figures and viewing everything as a microscopic accomplishment.  Publications such as Vogue are so out of touch with reality it’s insane, and it’s time we stop giving them the benefit of the doubt.