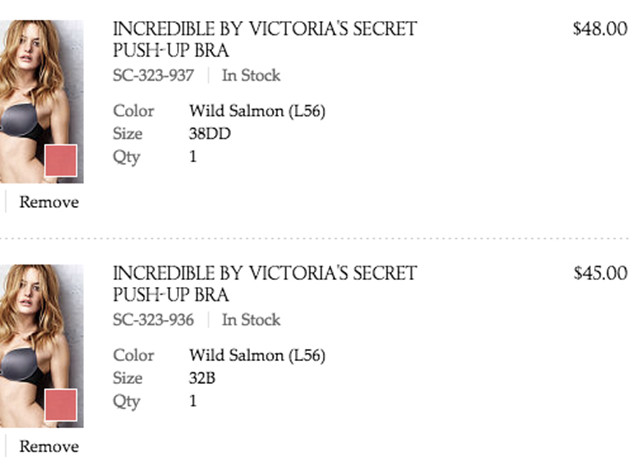 But like countless other lingerie brands, whenever they remember that there are E, F, and G cup women out there, they go with “bye.” What’s more a pain in the thigh gap is that today, when we looked for price differences among the sizes of the bras they do sell for women with racks, we found that Victoria’s Secret charges your jugs a small tax for their right to exist.

The above bra for women with easy-to-dress peach blossom bosoms is $45, and the triple D version of that bra is $48. It’s just a measly $3, which likely adds up for them, but it does sting. Below, another bra they make is $2 more when it’s a 40DDD compared to the same bra in a size 34B.

This is the message. You’re less welcome here, you’re kind of a hassle, so we’ll take more money from you if you want to attempt to look as smoldering as our standard sizes. They’re a bunch of self-esteem pickpockets.

Does it take more time, fabric, and tailoring to whip up a push-up bra in a size triple D? Yes. Would the quality of their Juicy knockoff pants have to suffer if Victoria’s Secret made prices equal? Probably not. The undeniably staggering number of people who would pay for lingerie if the company just sold stuff everyone could fit their boobs in would mean major revenue.

It’s like those people we never paid attention to in school said, no taxation without representation. Actually, go ahead and hire your token plus-size goddess for the press, Victoria’s Secret. We’ll still say it’s a b*tch move to charge more for more boobage.