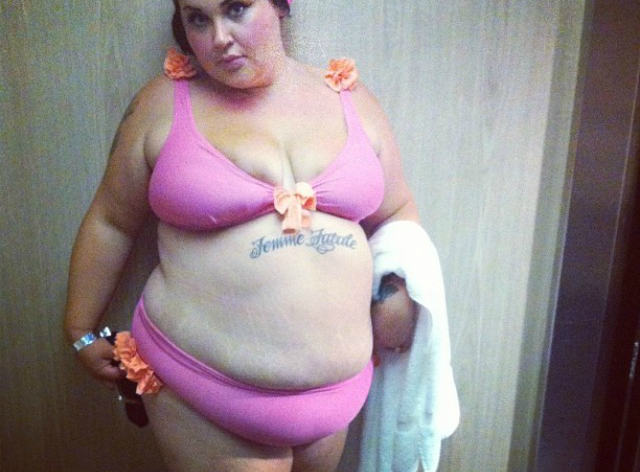 An Interview With the Internet’s First ‘Fatkini’ Trend Propeller
by Ashley Hoffman | August 1, 2015 at 8:24 AM

Finally, we can buy absolutely scorching swimwear made to support women with chest, soft stomach, and tush curves. Fashion has been fixing its rubbish bikini selection reputation from worthless to sexy rather quickly. But before we had GabiFresh’s fatkini collection for loaded hot housewives with accommodating pool boys, there was Jessica Luxery* the woman who is credited with coining the term “fatkini.”

Using a full coverage fire engine red maillot, she created her own DIY bikini by hand, twisting bowties with the extra fabric from the top she didn’t need. When she posted it online, the power move scored a ton of buzz, and it still does. People message her every single day to thank her for doing it. “I just a cut a freaking bikini. Why is that so important?” she tells me laughing, “but I’m touched by the way people connected.” She didn’t mean to be, but she became a pivotal voice for bathing costume progressivsm when she added the word fatkini to the lexicon.

Here, she talks about her online community, how access to bikinis that fit has evolved, and why she faces less cruelty for chilling on the beach now.

Why did you buy the full coverage suit?
I think mostly because that’s what was available in my size at that time. The fatkini wasn’t in fashion at Forever21 then. It was just not happening. I had seen a company called Byro. She had an Etsy then. I just only found that option and I ended up making one myself. It was just more accessible.

And how did you make it?
I literally just cut it in half and kept going back to the machine until it worked.

What did you have to do on the sewing machine so that it would work?
I had to alter the bust and make it more supportive. I used the material from the rest of the top to add bows on the straps.

Where did you get the name?
I was doing a lot of talking about bodies and fatness around that time. I wanted to make sure that people could understand there was more to me. I wanted it to be a fat person’s bikini.

Had you heard the term fatkini elsewhere?
No, I hadn’t.

What did your friends say?
My friends’ opinions were split down the middle to be honest. I had friends who were fat who were excited and inspired to make their own. My thinner friends, well some of them were supportive and some of them were stressed out go out with me in public. It created incitement at the beach so it was sort of up to my other friends bravery.

What happened at the beach?
I lived in San Diego, which is a body-obsessed place. I think my personality makes people think that they can say more to me than to someone else. A woman with children told me that I should cover up because I was indecent. She and I had it out because I wasn’t anymore exposed than anyone else. I was trying to approach other women and moms from a place of like…do you want to teach your children to hate their bodies this way?

Why do you think she said you were exposed?
I think the fat body is hypersexualized. There are things that maybe I cant wear like a little camisole without people treating me as though I’m engaging in lewd activities. That’s always an interesting thing. I think men feel more entitled to my body. It gets a lot of attention.

The term fatkini is more mainstream now and all over Instagram. How does that affect your personal life?
I think this really took off if it wasn’t necessarily because of me, but because of the community online fat community. It was quite small at that time too, but it’s gotten a lot of bigger. Plus-size bikinis almost everywhere now. It’s not as much of a big deal. I don’t get as many rude comments in public.

How did it feel the first time you wore it?
I felt a little bit nervous, but mostly I was so happy to have this thing, that moment to make my own freedom. It was a release, and the only thing that was holding me back from wearing this specific thing was the fears about what others would think. Once I got rid of what others think, I could do it.

But how did you get rid of those fears?
I think I just started to realize how tired I was. I was seeing everyone else being able to enjoy these things. I was part of the online community, people like Lesley Kinzel people who were writing about fat phobia and body acceptance. I just started to realize that I was letting other people make me a prisoner to my body and just realizing that as a woman, I don’t think there’s anything you can do to make everyone completely happy. Trying to keep up with what it means to be a good woman, it was really exhausting. It was about taking baby steps…not wearing a sweater, which I did to hide my arms. Starting to do these little things. I realized a woman on a street doesn’t really know you. She’s not saying those things about you. She’s mad that I’m not ashamed. We’re all supposed to feel ashamed. When people don’t feel that shame.

Where was mom in all of this growing up?
That has been a big part of my existence online. I’m processing my relationship with my mother. She’s mentally unwell. She was fat when I was a child and got gastric bypass and that really dramatically affected our ability to have a relationship. She was always really really abusive about my weight and again, that’s about my mom, but the way she was raised to believe things about her body. She never just let me figure it out on my own. We don’t speak anymore because of it because I kept realizing I have created this family online and I’ve been able to make friends in my real life where I get the kind of support I wanted from her.

What do you hope for?
We’ve made really big steps to include more body types and styles, but there’s a problem that happens with all plus-size designers. There’s only a certain kind of fat person they’re wiling to cater to because we exist and we want to look cute and we want to feel good. I think stopping plus size fashion at 26 is still really dehumanizing to people who go beyond that size. I’d like to see stuff my partner could wear, less gendered specific and pink butterflies! They love to f*cking put butterflies on plus-size clothes. I guess we’ve gotten really far ahead, but there’s still so much further to go, and I’m excited to see as more indie designers get publicity there’s a lot of really exciting things happening. We want to look good and there’s no reason why we should have to wait to look good or we should have to pay $60 for a t-shirt.

*her internet name that she uses to protect her privacy.

Editor’s note: Due to fact that the interview subject misspoke in one instance during this interview, her response has been adjusted to reflect her true intentions.