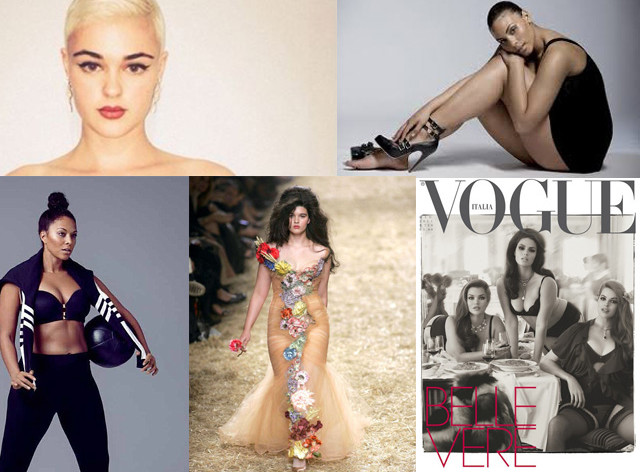 A Comprehensive Timeline of Model Bad B*tches Who Made Fashion More Body Positive
by Ashley Hoffman | July 24, 2015 at 4:39 PM

Fashion’s still a far cry from representative, but luckily our field of view is changing because the industry is starting to wake up to the need for body diversity. At least we’re much better off than in 1977 when Mary Duffy founded Big Beauties Little Women for plus-size and petite models. Even in 1998, when Katie Ford tapped Gary Darkin to recruit plus-size model talent, he was only after sizes 10 or 12 at the time, and the best these models could be #blessed with was a catalog or plus-size company ad. Emme was a success story because she actually cracked some major campaigns, but she still never walked a single runway.

Lately, the call for models who take up more space than usual is building steam. Here, we take a walkabout through ten bad b*tch models who sped up fashion’s body diversity movement throughout the last fifteen years starting with Sophie Dahl.

1. Sophie Dahl (2000)
In her infamous breakthrough Yves Saint Laurent Opium ad, she was very naked and possibly having sex with a ghost. So it was censored, and the debate on this really divided the people you’d like on your call list from the people you definitely wouldn’t have anything to do with. Her look is from another era, but thank goodness she’s in ours.

2. Crystal Renn (2006)
Steven Meisel and Ruven Afandor have shot sublimely photographed campaigns of this one time and time again. She’s an iconic beauty so it’s easy to see why she deserves to be a repeat offender. Not only has she had contracts with Evans, Torrid, and Lane Bryant, but she’s walked the runway for Chanel, Zac Posen, Elena Miro, and splashiest of all: Jean Paul Gaultier in his Spring/Summer 20066 Paris collection. She was even the face of a Jimmy Choo campaign in 2011. To her credit as a world straddler, she wore sizes that weren’t strictly plus-size for Mango. People called her dramatic weight loss a betrayal of the plus-size community. But really though, when a model blazez the trail and it’s this well-played, we should be thanking her and acknowledging her right to size down.

3. Marquita Pring (2009)
She signed with Ford Models in 2009, and appeared in that balls to the wall glamorous editorial in the spring issue of V shot by Solve Sundsbo. Her vibe is effortlessly ferocious so when a magazine gets her, victory is pretty much assured. She could teach a master class on how to make a sweater more sexually inviting than being naked.

4. Julie Henderson (2010)
This woman is strength personified. She’s a former basketball player, but obviously continues to be both baller and shot caller. She identifies as either a curvy or plus-size model, and she’s known for her sexy natural black curly hair and tomboy steez. Henderson was once in the movie August with Josh Hartnett, JOSH HARTNETT, and now she works with Wilhelmina. The exercise addict has spoken out about how much she hates it when on shoots people try to hide her curves. Question: what’s to hide? Answer: nothing, because look.

5. Candice Huffine
Thank you V magazine for exposing her girl next door who you’d like to marry in 2010 with that Curves Ahead editorial. She’s the very first plus-size model ever to design her own ready-to-wear collection. Hair: big. Face: of an angel. Body: well, here’s her Pirelli calendar. Nuff said.

6. Ashley Graham (2011)
This is your plus-size girl who sneaked into Sports Illustrated first via a Swimsuits for All ad. In 2007, she scored a Vogue profile that caused swooning. Before that, she starred in that beloved Glamour editorial “These Bodies are Beautiful at Every Size” along with fellow baes Amy Lemons, Lizzie Miller and Anasa Sims. She’s been in Levi’s campaigns, and she really stirred things up with a hotly debated Lane Bryant commercial. Named Full Figured Fashion Week’s Model of the Year in 2012, she’s also on the mainstream radar for being the president of curvy girl lingerie club. Find her own line of lacy underthings that she designed here.

7. Robyn Lawley (2011)
After she graced the historic, but disappointingly carb-filled cover of Vogue Italia, Ralph Lauren tapped her in May 2013 to show the sexier side of the outdoorsy prepster’s lifestyle. She’s a stunner, and she was recently Sports Illustrated’s first featured plus-size model. Because a woman’s own body is always an appropriate topic of conversation, people love to debate on what category she belongs in. But she’s vocal about size labels and her hotness is transcendent.

8. Denise Bidot (2014)
It’s impossible to conceal our raging hard on for Denise’s catchy “THERE IS NO WRONG WAY TO BE A WOMAN,” mantra because this model is major. She led the charge of baes at Chromat’s far-reaching New York Fashion week runway show. Before that, she closed Copenhagen’s 2014 Fashion Week when she walked for Zizzi Clothing. Recently, she shut the world down with a mesmerizing unretouched swimsuit campaign on the beach. She’s Puerto Rican and Kuwaiti, and also a real-life fairy godmother in spare time. She dropped in on a Brooklyn Latina high schooler who struggled with body image to give her a style makeover. It doesn’t hurt that her bedroom eyes burn a hole through your stomach. You can call her a plus-size model if you want because she doesn’t care, but after flipping through her Instagram, you’d probably just like to call her.

9. Tess Holliday (2014)
No one worth inviting over for boxed wine hasn’t heard about her People cover. She’s seductive, and she’s part of a brassy girl gang of non-model bloggers who also help remind everyone that women can appear in crop tops without breaking laws. She’s been in Vogue Italia, a Benefit Cosmetics campaign, and she does vintage without even trying. She’s never discouraged by the inevitable dead-ends a woman of her size hits on the internet. Originally, she scored Torrid’s attention House of Dreams Model Search, and she’s modeled clothes for Domino Dollhouse, Black Cat Bikinis, and indie designers. In 2012, everyone saw she looks rather fetching out of them. Call Milk Model Management if you want her to look seductive for you. She takes up the most space of any model to date, which is radical.

10. Stefania Ferrario (2015)
Call her a model and then call it day before you try labeling her “plus-size.” The Australian bombshell with white-blond short hair is the steamy face of Dita Von Teese’s lingerie label, and she’s deliberate about busting through lame old-fashioned size barriers that women are over. She scored buzz by delivering this message to people who at this very moment stick labels on model bodies:

I am a model FULL STOP. Unfortunately in the modeling industry if you’re above a US size 4 you are considered plus size, and so I’m often labelled a ‘plus size’ model. I do NOT find this empowering … it is ‘harmful’ to call a model ‘plus’ and damaging for the minds of young girls. Let’s have models of ALL shapes, sizes and ethnicities, and drop the misleading labels. I’m NOT proud to be called ‘plus’, but I AM proud to be called a ‘model’, that is my profession!

Find her in the Project WomanKIND series.