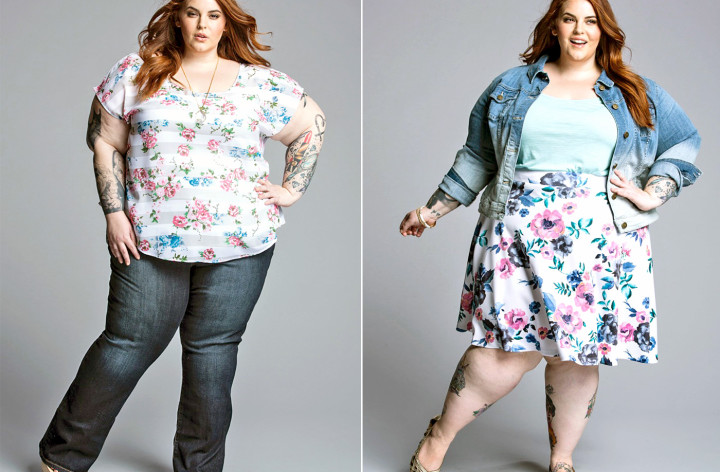 “Plus-size” means very different things in modeling and IRL. Plus size models are generally a size 12 – 14. This, if you live basically anywhere in the United States, is the size of the average consumer.

Recently PLUS Model magazine posed their readers a question that sought to address why this was.

“Is the plus size customer ready to see size 20+ models in campaigns?” they asked on Facebook. “Brands are telling PLUS Model Magazine that when they use bigger models those items DO NOT SELL as much as they do with size 12/14 – 16 models. What are your thoughts?”

Not surprisingly, customers who are considered plus-size IRL are eager to see the clothes they’re buying modeling on women with similar body types.

“It’d be about damn time they used plus size models towards the mid and higher size range that plus size clothing covers! I’m so sick of seeing “plus size models” who look thinner than me modeling clothing that goes up to a size 42,” wrote one commenter. “I’m shocked that they do not sell as much when they use models more around the size 20 rang than 14/16. One, size does not determine beauty. Two, the majority of the plus size community is 20+, not 14,16,18. The majority should represent, although the minorities shouldn’t be left out.”

“That sounds like a totally bogus excuse,” said another. “Of course we want to see bigger models! We want to see ourselves represented, we want (need) to know what’s available to us, and that these labels aren’t dissing us. It frustrates me to no end to see skinny models wearing clothes being sold to big girls.”

“As someone in the size 20+ range, it is very difficult to be able to determine whether the clothes would look good on me or fit or even come in my size,” another woman asserted. “Seeing a model that size would give me an idea about how I look in the outfit or clothes.”

“I’m more likely to buy something if I see someone who is a US size 20+,” echoes another. ‘My size varies…in the last 5 years I’ve been size 12 to 22. I only buy items from stores that feature a model close to my shape..if they don’t and I see someone in real.life with the same outfit or similar…then (with my shape) I buy it.”

Some women claimed that using models who fall towards the lower end of the size spectrum is often a lazy way to disguise poor design.

“I don’t think the fault is in the model, but in the design of the clothing,” one consumer points out. “A poor plus size design is much more apparent on a 20+ model that on a 14+ where more design flaws can be hidden by pinning etc. At least that’s what I’ve found to be true, I’m an 18/20 and I enjoy seeing a great design on a model my size!”

Clearly plus-size models are “having a moment.” Tess Holliday has been given the tick of approval by everyone from Torrid to David LaChappelle and and Vogue Italia. But Holliday is the exception rather than rule. Look at any plus-size clothing lookbook and you’ll see models you’d probably consider “average” if walking down the street. Unfortunately this is also why plus-size models often cop backlash when they’re hired to represent that plus-size population. Even body-positivity warriors like Ashley Graham aren’t immune from nasty Instagram comments accusing them of not satisfying body labels that were forced upon them in the first place.

Of course things are similar in the straight-size modeling industry. A Victoria’s Secret Wonderbra is going to look different on a size four, 5’5″ woman than it does on Candice Swanepoel. Models are generally a few sizes smaller than the women they’re selling their outfits too. And we can’t see Prada or Alexander Wang swapping out their go-to girl squads for women who more adequately represent the straight-size consumer.

Then again, brands like Aerie have seen profits skyrocket since using un-photoshopped non-supermodels in their campaigns, while competitor Victoria’s Secret is increasingly less able to translate hype into sales. And clearly the struggle is more real for larger women who require a very specific fit. Claiming that larger models “DO NOT SELL” belies a narrow view that suggests women’s demands can’t change as they become more aware of a) corporation agendas and b) their own damn bodies.

Are you more likely to buy clothing modeled on someone with a similar body shape?