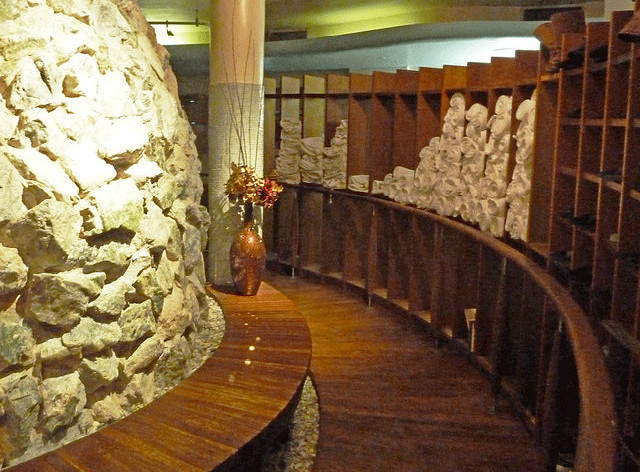 The warm air was thick when I slid next to the naked women spreading out in hot tubs at a dim Koreatown spa.

They were members of the Outdoor Co-ed Topless Pulp Fiction Appreciation Society, a book club for people to meet either topless or nude, depending on the venue — this was one of their fully nude events. The Society started as a safe way for women to be exercise their legal right to be topless outdoors. To be in public without a place to drop your phone becomes easier when other naked people join you. “I wouldn’t do this alone,” someone said to her friend.

It’s too damn cold to kick back in the park with your nipples out now, so they retreat indoors. Being naked in a spa isn’t exceptional behavior, but being this open with your body at a social event was. Most American spas are gender-segregated, or at least require a robe or bathing suit. But Juvenex was progressive enough.

“When they realized it was a bunch of harmless intellectuals who liked books, and not a group of Las Vegas party types, they were satisfied,” Charles Kennsington, a founding member said.

White robes came off, and gradually, more women slipped into the sugar-filled pools like you would at any spa party. But this was different. Nobody checked anyone else out. Nobody complimented anyone’s body or trashed their own. Predictably, the vibe of the place was relaxed, but their voices rose in excitement. It wasn’t just aromatherapy. Everyone seemed at ease, because, as so many of them kept explaining to me, they felt natural this way.

“There’s something so freeing about not wearing clothes,” competitive pole dancer Angela D’Abrosca told me. “I’m a very open-minded person and to find a bunch of people who are as well and not be judged for it is amazing.”

People call celebrities like Rihanna groundbreaking when they’re not calling them attention hungry, but D’Abrosca said that normal people are treated differently and that even some of her friends don’t understand what she’s doing. “They automatically assume that you’ve gone crazy, but it hasn’t changed who I am as a person. If anything, it’s opened me more up to discovery about myself.”

Their willingness to be buck-naked when they meet people for the first time was in synch with what’s happening. Female toplessness and nudity has a long and current history of being policed and oppressed. Some view this kind of freedom a threat or that women are a threat to themselves. But the Free the Nipple cause is enjoying some forward momentum thanks to more media attention, celebrities, and activists. Three years ago, some women were arrested for being topless outside in New York even though it’s legal. Once, a female police officer came up to this society and told them to put their shirts on.

To that, they said, “actually we don’t [have to.] That’s not true. Please check with your headquarters.” She did, and had to apologize because they were exercising their legal right. The police tone has changed, Kennsington said. “This year, several cops came over to us in the park and they were prepared by their commanding officers. They actually came over to say, ‘has anyone harassed you?”

Some of the members were confident kids who ran around in their underwear like life was their personal sprinkler. Others later became ashamed of their bodies, and finally just said, “fuck it.” Soon, the two hot tubs were packed with women playing with the lemons bobbing around in the water. The women outnumbered Kennsington, but they didn’t seem to mind.

Some people would rather endure a lifetime chained to Justin Beiber than appear in public missing their shirt. The need to race behind a bush when you’re caught without pajamas in a nightmare may come from human decency, but for women, it’s also from being told what they’re supposed to look like or not to show too much leg, ass, cleavage, or ankle at all the wrong moments. So before a business owner, Katherine Lee, got her massage, I asked her how it felt the first time.

“If I’m just talking with my top off, and no one’s acting like I have my top off, it doesn’t feel like anything,” she said. This was her second meeting. Her first was at Bryant Park. “There were a lot of perverts. You’re trying to talk, but a lot of guys are pointing their cameras, so it was a little distracting, but I don’t really care about them and other than that, it was great.”

Nude model Marlo Jax said that she didn’t used to like what she saw in the mirror, but she stopped indulging that thinking. Being naked among friends liberates her.

“It makes me feel whole because I don’t have to hide myself, Jax said. She moved here from Pennsylvania. “There you couldn’t free the nipple if you didn’t want to spend the night in jail,” she said.

Jax actually felt more comfortable as a nude model because modeling fashion made her feel self-conscious about how clothes looked on her. “When I’m nude, this is me. That’s all I have. Take it or leave it.”

But men in New York will misinterpret her nude modeling photos on Twitter because people can’t accept her lifestyle. “Just because I feel comfortable enough to be naked doesn’t mean I’m going to spread my legs for everyone.”

With their heads tilted back on the edge of the tiles and their arms outstretched, the women breathed in the thermal air and chatted: about jobs, charitable efforts, and what they had for breakfast. In this setting, what they radiated wasn’t an exhibitionist’s confidence, but a serene comfort. They weren’t holding much back from anyone. Some of them had their knees pulled up to their chest for warmth, but the eye contact these women kept had an unambiguous directness. The conversations were candid. There was the occasional sex joke involving fruit (“I’m playing with the lemons”… “Are they getting aroused?”) but there wasn’t sexual tension that night.

For Nicole Power, social events without pants helped her get closer to her body.

“I’m working on getting more comfortable with my body and it makes me more comfortable branching out in different types of clothing because people can tell what my body looks like anyway regardless of what I wear, “ Power said.

“I had a tendency to wear high-waisted skirts because someone [Female Fashion advice on Reddit] said it would balance out your figure. But I went to Ecuador and got these crazy-colored pants, and it’s like… these are not a high-waisted skirt or the right silhouette, but I’m still going to wear them.”

They were there to relax with their friends, so I left them to it.