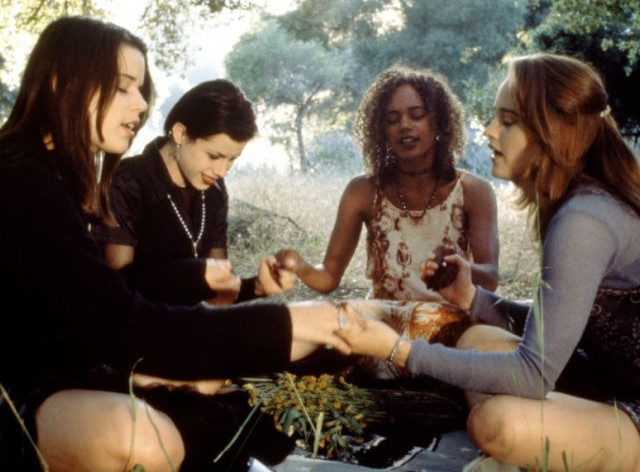 This weekend I spent my Saturday night at a full moon ritual for witches. All of the people there — pagans, wiccans, and priestesses — had come together because they believed that if you didn’t like how things were going, you could invoke spirits to help you make changes IF the moon was full.

Everything about the women in the ritual room was witchy. One woman wore a glittery velvet black dress, her silver pentagram winking at me from her necklace. Another wore a pendant on her forehead. Some of their trailing temple cloths had symbols of Islam and Judaism. The stuff didn’t look like it could be purchased for Halloween.

I was willing to try it in case it worked. Maybe I could score a new Twitter follower out of it. Of course it would have been great if I could witness an evil person writhing in pain due to the spirit invocation, but being a witch was really about love and healing.

A handsome young guy approached me in a hooded robe. He offered me an anointment from his glass vial. He told me with complete conviction that it had lavender (for peace) rose (for love) and mugwort, which protected you from negative attachments to the evil spirit. It looked like a great way to knock yourself off, but fair enough.

What happened that night was almost identical to what you’ve seen in The Craft minus the bloodshed and visible magic. The table at the center of the room was furnished with wands, significant looking daggers, and dingy goblets, confirming that this was for real.

The difference between the witches you might imagine and the witches at this thing is that these witches never talked about boiling anyone. But they weren’t fucking around. Their beliefs seemed to give them a little more power than your average faith. While you might be perfectly happy with your “you get what you put in” arrangement, they had spirits coming through that night to set stuff in motion.

We joined hands in a circle, and said,

“We cast this circle hand to hand, in perfect love and perfect trust.”

I feared I was messing with their flow because I wasn’t a real witch. I also worried that twenty New York witches might curse me so that I would never again know the joy of a strong wi-fi connection or a promo code discount. But I decided I couldn’t actually interfere with what they were doing.

The ability to make magic was always a source of endless fascination for me. I admitted to myself that going was a product of my own wish to connect with my late father, an infrequent Catholic who read extensively about the Occult. Maybe invoking the goddess within me would allow me to pretend that I could talk to him again or at least, that I was definitely pulling off my jumpsuit. Sarcasm aside, my experience was actually the wildly exciting night of spell casting and impassioned spirit invoking I wanted it to be.

One witch hummed and swayed quietly and said,

On this night when the full moon rides high in the sky by candle flame and incense smoke do I invoke thee
O beautiful goddess of life birth and rebirth who is known as Hecate Artemis Brigit Diana Isis and many other divine names
come witness and bless this rite.

The next blessed being asked the great mother to guide us and love us, splashing us in the face with water. We turned to face each direction one by one. North, east, south, and then west, and we did a lot of thanking for the elements and the blessed moon.

Somehow, this all could have been yoga retreat for people who nod when you tell them all about how you were a mermaid in another life, but this wasn’t that. What stops this from being anything like that is that you’re not praying, you’re summoning spirits to the room. On paper, the spirit invocation seemed a little like saying grace, but it was a lot more dramatic when a witch was shouting the words and holding a dagger over my head.

When a woman swung an incense burner and thumped the floor to keep the beat, I felt something ineffable, like magic. The meditation leader took us to an oasis where a fertility goddess with long silvery hair waited. She was going to help us out with what we desired, but it was still on us. Drinking milk from her breast was also part of the deal.

To finish, we ran around the table in a circle singing a witching song about the magic in the moonlight. That sounds like something from Jersey Boys, but it’s closer to something that might make you piss your pants when you accidentally find in the woods. The chants grew louder and the sense of unity spiked. They howled and clapped feverishly, lifting their skirts to run faster.

They were there to celebrate together, and that’s how I left them.