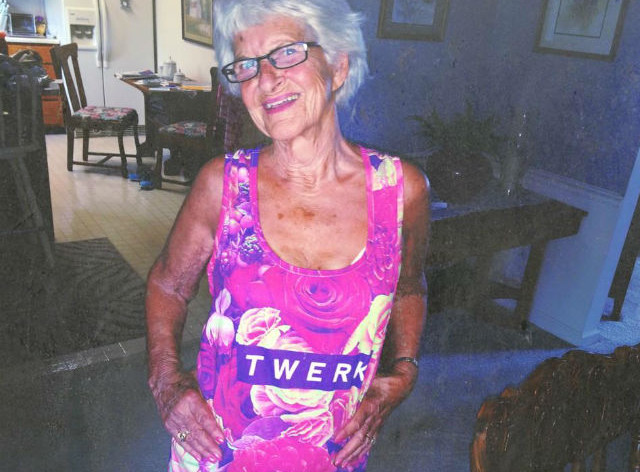 Baddie Winkle on Dealing With Trolls, Posing Nude, and How Being Internet-Famous Helped Her Through Grief
by Ashley Hoffman | December 1, 2014 at 8:57 AM

Baddie Winkle does tie-dye and cutoffs better than anyone, which is why she quickly made a nest in the hearts of her huge following. Her granddaughter art-directed the first picture, and it blew up on Twitter immediately. The smile-producing shots feature her chillaxing in twerk team gear or naked covered in leaves. When she’s not tweeting about getting a joint replacement or nominating Beyoncé for the ice bucket challenge, she also goes to church and volunteers at the Salvation Army. Her husband died in a tragic truck accident and she lost her son to cancer, but her zero fear social media experiment paid off.

Baddie Winkle has arrived at something truly important that goes beyond a senior citizen wearing hip-hop stuff. Her Twitter account has a rascally layer of realness every woman should aspire to. Her fame isn’t without idiot commenters with an abundance of free time, but she has hater glasses for those. Her feed is a tonic to women who fear judgment everywhere, so we called her up in Kentucky to talk about her style, how she became comfortable with herself, and the funny things people send her.

I read that you’ve experienced a lot of loss.
Yes, I have, I’ve had great loss, but that’s what I’m trying to overcome. I was very down when we started this because I was grieving and it never goes away, so I’m trying to get over that. I have a lot since I started this so that’s one good thing.

How has it helped you?
I think my husband and my son would be pretty tickled, they would laugh a lot and they’d be probably be proud of me too to do this, I try to think that way anyway, so it has helped me a lot, but I would like to help other old people to get out and do things instead of just sitting around.

Obviously you dress for yourself now, but what did your husband like that you wore?
He loved to see me in dressed up clothes . He loved to see me in bathing suits, because we had a lake in our backyard which is of course still there. We had a lot of parties and barbecues and square dancing dresses, and he loved to see me dress up to go to church. I worked for 28 years, and he would say, “I don’t believe I’m going to let you go to work, you look too pretty.”

People who are older face discrimination. What are your thoughts on that?
Well some people… they don’t want to take the time to really understand people, and I can’t think of anything good about getting old, but I try to be very positive. When I meet a lot of older people, I try to be very positive with them, and I interact with them, but the young people, they kind of shuffle them off and, you know… but I’ve got the greatest grandchildren in the world. They’re all just phenomenal.

People really responded to your confidence. Do your remember when you started to feel comfortable?
It took a while. I really did, but at first, it was so nice. Everyone was saying such nice things about me, and that’s when I really started being confident.

What are some of the coolest things people have sent you?
Someone sent me an iPod and it’s monogrammed on the back, which was I thought really nice. I have gotten lots and lots of clothes — t-shirts, sweatshirts — and I usually take a picture with something they’ve sent me so that praises them. I’m in a German magazine so I could see my picture in it, but of course I couldn’t read anything in it.

Do you have a favorite outfit?
The first one I made. I think that’s my favorite. Tie-dye shirt and cutoffs and socks. I think that was my best picture, because the other pictures, they’re okay but not my best. I also liked the Easter picture that was made at the Methodist Church.

You also posed naked with leaves. How was that for you?
Oh. (laughs) That’s not my favorite. Well I don’t know it was just a weekend and it was nice, and I just did it for the fun of it.

Did anyone tell you it was a bad idea?
Oh sure, I get bad comments all the time. They have nothing better to do, but I get more good comments than I get bad ones.

What’s something people get wrong about you?
As a matter of fact, on Facebook, someone had posted my picture and said, “my granna does drugs, what does your granna do?” which I don’t like at all because I’m not for drugs, so I’m going to see if I can have it taken off. I don’t like that at all.

How do you define your personal style?
I’m kinda sporty and I don’t like frills. I don’t like that. I like to wear slim pants, but at my age I am pretty well-built, we’ll put it that way, so I like to dress sporty with sporty clothes. I get a kick out of wearing the things that they send me once in awhile, but mostly I wear dress-up clothes, especially to church on Sunday morning.

How do you put your outfits together?
I just pick up a pair of cutoffs. When I dress for a picture or something like that, I pick up a t-shirt and pair of cat-eyes and do whatever, but then when I dress up, I like to have nice dress on or a nice suit and nice heels and things to go together. They just know my Twitter and Instagram… well they did see the Easter picture. Maybe I should start a new trend — dress-up. I will think about it. Maybe I’ll make a Thanksgiving picture.