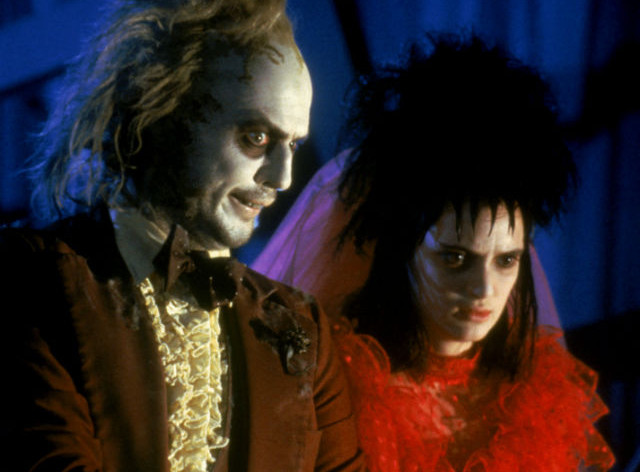 It doesn’t even need to be Halloween to watch Beetlejuice, unless you’ve got something against a rendezvous with really cool dead people. Visually, this classic is more interesting than the average acidhead’s nightmare, and for a twist, it’s the ghosts telling the ghost story.

You actually want the recently deceased Maitlands (Alec Baldwin and Geena Davis,) to scare the Deetz family off with violent jumbo shrimp. But even though that would mean getting rid of their obnoxious sculptures, we’d go through withdrawal over Mrs. Deetz (Catharine O’Hara,) who is all perfect hair and weirdo black leather accessories. It would be even harder to lose Lydia Deetz (Winona Ryder) because her misfit funeral style was so on point, it’s still haunting us. Everything she wore and said was gold, so we’ll forgive her for putting a stop to those greasy child demon bangs, in the end. (The ghosts are the only ones on Lydia’s radar, because she herself is “strange and unusual.”) Of course, Michael Keaton’s relentless showmanship as our guy, Beetlejuice, the joke machine of the underworld, still holds up. So this movie has stuck with us, because Tim Burton’s got what teachers call creativity and it offers seriously valuable lessons to live by.

Here are the ten most important life and style lessons from Beetlejuice.

1. If you want to take a stab at making a friend for the first time since your parents arranged play dates, copying someone’s outfit and then remarking on how you’re twinsies is a start.

2. Do some hair squiggles on your face and no one would ever use your name and basic in the same sentence.

3. The moment someone says something you don’t want to hear, break into some impromptu song and dance for a temporary distraction.

4. Draw attention to your eyes.

6. Red and green are complimentary colors, but it’s best to do subtle versions of each.

7. Make sure your outfit is inviting and tells the world you’re ready to socialize.

8. Frilly bows convey the wrong message. It’s better if it appears that your forehead is under attack by a spider.

10. You never do get a second chance to make a first impression.