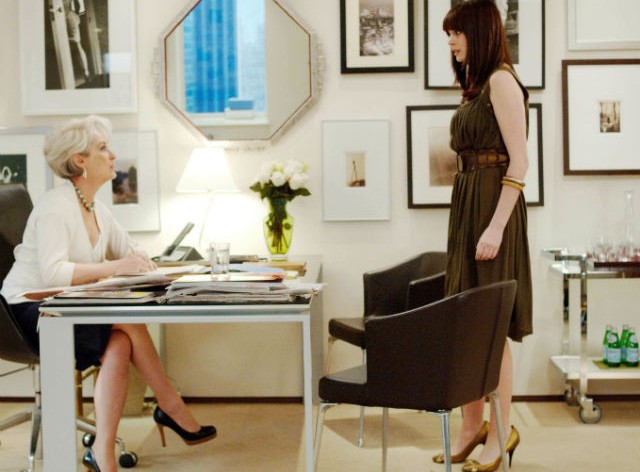 The fashion magazine job, one the most watchable clichés of movies, has become symbolic of the ongoing struggle that is the high life in New York. But before you get ready for your fantasy career path, OK-ing the line sheets for a glossy from a beach chair, let’s make sure we manage our expectations based on fake reality. If we learned anything from the canon, your editrix won’t really get you. You’ll be stuck writing about things that seem frivolous. (The Devil Wears Prada, How to Lose a Guy in 10 Days.) None of it will be as soul-satisfying as what you know you could do: be a muckraker who goes to jail in Egypt for being a muckraker and then pen a Pulitzer-winning muckraker piece about your own prison conditions. But soon enough you’ll be so seduced by the crepe collars that look like roses and gifts from Ralph Lauren (How to Lose Friends and Alienate People) that you’ll want to stay.

Here’s what to expect from magazine jobs based on the movies.

The Devil Wears Prada
You’ll have to carry out bullshit tasks even though you were the star reporter who wrote about janitors at your fancy university. You’ll apply your “so-called work ethic” to fetching pool toys and advance Harry Potter copies for your editrix’s snotnose kids. She’ll withhold approval, issue orders in a hushed voice, and sometimes make you cry. But then luck will strike. Your supervisor who’s been magsplaining everything to you will get the sniffles, and you’ll remember someone’s name. You’ll get a trip to Paris in congratulations. Perks will include: Nancy Gonzalez bags, Chanel boots, and new bangs. You’ll lose weight because mollifying your boss’s ego will mean you have no time to eat your sexy chef boyfriend’s expensive cheese. You’ll drive him and the cheese away because your allegiance will be to the magazine above all else. When you lose him, it will mean things are good. Career advice from Stanley Tucci: “Let me know when your entire life goes up in smoke, means it’s time for a promotion.”

Raising Helen
Your life will be cool, and you’ll be friends with the bouncer. You’ll be so up on things and plugged into street fashion that you’ll even befriend a young black model with an afro and put her on the cover of your magazine. Then, unceremoniously, you’ll be left taking care of your dearly departed sister’s kids. You’ll have to live in a gross apartment and balance the demands of fashion’s neck-braking pace with mom things. Kids and fashion? That’s crazypants! Your editor will not appreciate how babies are holding you back from events where Paris Hilton brings a dog as a date. Your new kids will paint your boss’s face and star in a fashion show. You’ll leave the fashion world behind for more meaningful things, and somehow a minister will become involved romantically.

Confessions of a Shopaholic
Your addiction to Zac Posen will bury you in debt. You’ll land a job at an important financial magazine, but you’ll still turn it into a fashion writing job. You’ll revolutionize economic news when you describe investment terms by using shopping scenarios that fashion girls just get. Celebration will ensue when you get on a morning show for making the big bad world of finance relatable to girls who love shoes. You’ll have a cool name like the girl in the green scarf or the chick in the crop top power suit made of eyelet. But your debt will catch up with you, and you’ll be shamed for your overstuffed closet in public. It’ll shock your brooding English gentlemen boyfriend, which is a problem because you finally found someone who spoke Prada.

How to Lose a Guy in 10 Days
You’ll want to write about the real issues, but you’ll be the how-to girl. For your most interesting how-to, you’ll hook an ad guy who looks like Matthew McConaughey with your smooth smoothiness. Things will get weird when you abruptly turn on the crazy and introduce him to your love fern. Making up ridiculous names for his dick will just be part of the investigative journalism. You’ll go soft when you meet his charming Staten Island family though. Then you’ll have to do your part to make yellow satin happen and a Frenchman will loan you a diamond necklace. It will be an enchanted evening, but you’ll still have the farthest to fall when he finds out it was all a con. It won’t matter that your splashy piece on duping an ad guy will earn you more freedom from your editor to explore any story you want, like plastic surgery, but upbeat.

Zoolander
You’ll wear a pant suit to chase the cover story about a self-absorbed model for Time magazine. It will be frustrating to get his quotes down on your notepad because he’ll be surrounded by a coterie of ego enablers, and he won’t turn off his little phone. On occasion, you won’t uphold your principles and you’ll get too close to your sources like when you have a threesome with him and his rival who is so hot right now in an opium den. You’ll also slip up when you confess that in the seventh grade, the skinny women of Vogue and Glamour gave you an eating disorder. The model you’re covering will give you a gamechanger of a makeover, but you’ll soon learn that your source is a pawn in a diabolical fashion designer’s murder plot, so you’ll have to be part reporter, part spy.

How to Lose Friends and Alienate People
You’ll feel out of place at Vanity Fair because it’s like a fair for vain people. You’ll have the urge to help your glamorous editor up when she falls down in her fur coat, but she won’t want you to touch her or acknowledge her existence. The vacuous people at the boat parties won’t dig Conair as much as you. There you’ll insisting that the free press is the last defense against the tyranny of stupidity. But then Graydon Carter will tell you to grow up and stop bitching about famous people. At around that time, you’ll start enjoying the company of gorgeous fame whores. Those pesky allergies to status and pretense will go away, because you’ll start climbing. Famous actresses will want to sleep with you, and you’ll wonder if it’s all enough.