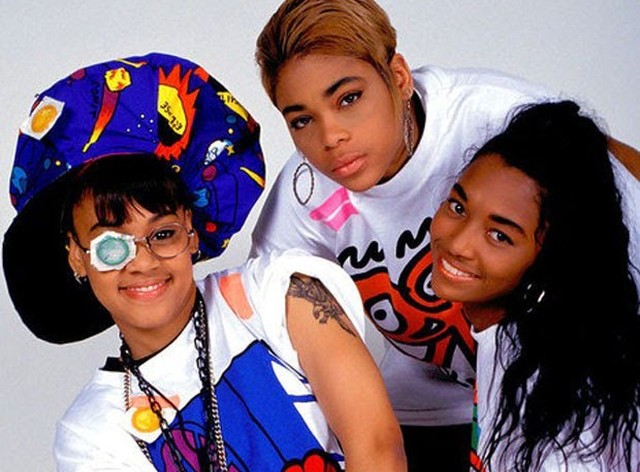 Two of the biggest trends around right now are the ’90s and recycling, which might seem kind of ironic, because in the ’90s it was far more important to dispose of your empty Coke can via backwards overhead swish than it was to get it in the right receptacle. But one person who merging these two trends aggressively is Jeremy Scott. So, let’s talk about Resort 2015, the designer’s second collection for Moschino.

First, the awkward: The clothes he showed this week are old news, and not in a good way. After Scott’s borderline-iconic collection debut for Moschino last season I were psyched to see where his mass consumer culture-consumed mind turned next. Kinkos? Windows? Huy Fong Foods sriracha? But instead he turned his eye to his own past collections for his namesake brand, and I don’t think he was doing it as a clever jab at the ubiquity of those French fry iPhone cases. It’s more like simply realized he had a shitload more money to invest in his ’09 dreams. Fashionista has the depressing side-by-sides here.

But now for the collection’s saving grace: Crimped hair. It’s amazing how a beauty look can become the unforeseen star of an entire season — the golden gilded brows Pat McGrath created for Dior’s Spring 2014 show, Marc Jacobs’ surfer-punk bowl-cut wigs (I’m still considering one.) I’m pretty sure anyone paying thousands of dollars for something upcycled from the scraps of Jeremy Scott’s lower-priced past can afford to travel via air-conditioned cabs all summer, but for those of us waiting on a sweltering train platform at 8am, it’s easier to find ways to werk the frizz rather than fight it. And what better combo than a srunchie, a can of Wella hairspray, and your trusty Remington crimper? Call mom and get her to plug it in now so it’s heated up by the time you arrive home for Christmas.

It’s interesting that 2014 is in some ways more ’90s than the ’90s were, and yet we’re very choosy about which trends to revive. I’m personally offended that Tevas came back before platform flip flops, and I don’t know why chaining your wallet to the belt loops of your jeans is not a socially acceptable method of keeping your cash safe. On that note, how ’90s is always needing cash? It seems unfair that some restaurants still refuse to split checks on two cards and yet wearing condoms as fashion accessories is deemed “inappropriate.”

In the spirit of the season, here are 21 ’90s trends that it is our personal duty to revive immediately:

2. Butterfly clips
The less they do to actually hold your hair in place, the better. Half-ass some cornrows for full ’90s Sarah Michelle Gellar realness.

5. Spaceman jackets
Also, Spaceman candy. Though I have a feeling the cigarette likeness wouldn’t fly stateside.

6. Hypercolor t-shirts
Now that we have the science for more effective deodorant, you never need wash it and kill the magic. These were basically wearable GIFs!

7. Plastic lunch boxes
Bringing lunch to work should be cool now that Whole Foods charges $15 for a salad. Plus the matching plastic water bottles are equally useful for taking wine to the park.

8. Brown lipstick
Only this time, in the same shade as your liner.

10. Pigtails
Invest in a protractor to perfect those sweet ’90s degree angles.

11. Wallet chains
These would be perfect for the NYC subway.

12. Sunglasses cords
Bring some Dadcore to the beach this summer.

13. Hard Rock Café t-shirts
But only when worn without a trace of irony.

14. Heeled Chuck Taylor high tops
Tevas were brought back before these. There is no justice in the world.

15. Pagers
Prevent FOMO without ever actually having to reply — because you literally can’t!

17. Layaway
I could have paid off a Céline coat by now if I was giving my checks to Barneys rather than bars.

18. Slap Bracelets
Remember when putting on jewelry was actually fun?

19. Neon windbreakers
Those without crunchy fabric and abstract geometric shapes need not apply.

20. Body glitter
All we want is some viscous, preferably tinted gel with a sickly sweet, artificially fruity smell and some light-reflecting particulates suspended in it. And it has to come in a tube or rollerball applicator. Is that really so much to ask?