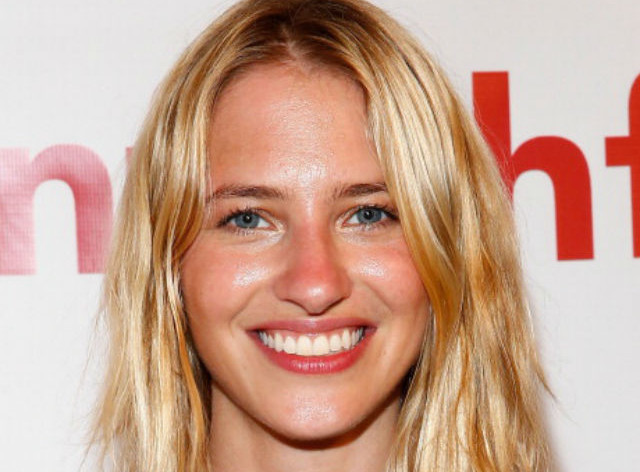 Activist Sara Ziff on Her Fight to Empower the Garment Workers and Models That Fashion Exploits
by Ashley Hoffman | June 4, 2014 at 1:02 PM

It was risky and deeply personal when Sara Ziff took a stand for the rights of models while she was walking in shows and at the height of her modeling career.

She went to work on her documentary, Picture Me: A Model’s Diary. Into it, she poured everything she knew of the exploitation facing models since she started modeling at 14 — the wounds of sexual harassment and the abuse of young opportunity-hungry models who didn’t know to demand better, and she debuted her first film.

But the movie was incomplete. Ziff left the most compelling stories of injustices on the cutting room floor because her friends backed out. Despite critics who vetoed the film as whiny, she blazed away, founding The Model Alliance, a not-for-profit organization that aims to give models in America a voice and improve their working conditions in an industry that turns a blind eye to sexual abuse, eating disorders, and child labor law.

“Once that was out there, there was no holding back,” she tells me. “It was a very scary time for me, I was still booking campaigns doing shows so I had a lot to lose by speaking out.”

Last night, she accepted the Inspiration and Visionary Award from the Women & Fashion Film Fest. Her second film Tangled Thread screens today in New York, and it’s a survival story set in hell. Ziff embeds herself in the lives of young female garment workers fighting to survive in Bangladesh in the wake of the Rana Plaza factory collapse. Ziff walked over the rubble, where there are still body parts no one has bothered to remove. The horrible stench reminds everyone there that this is still a crisis in progress — not that they need a reminder.

“It’s hellish,” she says “to see these mothers who have lost their daughters, and they haven’t gotten compensation. It’s not just about the loss of life. It destroys whole families and communities.” Garment work is the gig to get, and the teenage girls are the primary breadwinners in the families, making designer clothes in dangerous factories. Her camera crew captured a pair of Joe Fresh Jeans jeans among the debris, a detailed damnation of how criminally neglected the outsourced labor is.

We met at Cafe Cluny in the West Village, where a persistent waiter in a striped shirt was overselling Ziff on the pink lemonade. Even though she looked effortlessly beautiful, she was feeling under the weather, but she’d never pass up a chance to speak about her cause. “It’s my lifelong project to organize across the supply chain from the fashion industry to the garment workers in the most horrendous conditions risking their lives on the job,” she says, dropping Alka-Seltzer into her glass.“80% of the garment workers are young women and they’re the same age as the models, and we’re all trying to have a voice in our work,” she tells me.

Families are still convulsing from the avoidable collapse that happened that morning a little more than a year ago in Savar, leaving an estimated 1,131 dead, 2,515 injured, and countless families out of an income. One worker, Reba Sikder, told Ziff how she survived under the rubble for two days. Ziff met her parents who haven’t received any compensation yet, and Reba can’t work because of her injuries. “The Walmarts of the world should be ponying up,” she says, her pink lemonade melting.

Interviewing survivors in the disaster-ravaged region, she linked up with Kalpona Akter, a labor leader for the Bangladesh Center for Worker Solidarity. “Oh man, she’s a powerhouse.” Akter has been leading the labor union in a place where loud defiance can mean death. She was thrown in jail, tortured, and her male co-worker, Aminul Islam, was killed in the effort. “I saw her developing these new leaders in these young women who are 16 and 18 and 20 speaking out and chanting,” she says. “She’s the most admirable woman I’ve ever met.”

It’s still new territory. Her advocacy got rolled eyes from fashion people who didn’t think she should tell them how to run their businesses. But there’s hope – more than 150 brands including Calvin Klein and Tommy Hilfiger have signed onto the Bangladesh Fire and Safety Accord, a transparent landmark contract requiring that companies take responsibility for the factory where the clothing is made. “It’s the first time worker groups have a seat at the table,” she says.

Ziff is poised and at ease because her urgency is in her actions for human rights, not in her presence. Her sweet jokes and professional courtesies are all in service of her unrelenting passion to empower the young girls whose needs continue to multiply. She visited Bangladesh in March this year, and her work has forced people to see the glamorous fashion industry in a radical new light.

This time she brought her friend, model Alise Shoemaker, who is also a part of the Model Alliance, to a developing country for the first time. “She knew very little about the garment industry or the factories,” she says, “but she came away with so much and she spoke so well about it, and that was a moment where I felt, ‘okay’ other people get it.”

While people obsess over cage-free eggs, the same attention hasn’t happened yet for labor rights. “All of this is very clear in my mind, the work that needs to be done.” Boycotting is never the answer, because that would only worsen the workers’ lives. She’s hoping for a sweat-free label proving that the people who made the clothes earned a living wage. “It needs to be easy for people.”

In the film, which is a much-needed tonic to glossy fashion media, she uncovers what’s happening now from a personal perspective. As Patty Smyth’s “The Warrior” plays, you see a strange clash of Bangladeshi garment workers toiling on sewing machines along next to a parade of runway models. It seems disjointed, but then you let the throat-tightening reality that binds the disparate worlds wash over you. Both are vulnerable to the same companies. Ziff’s mission is to serve both groups, and her role is as absorbingly complex as they come, but she’s getting further along with garment workers and with models in America.

Last October in New York, Governor Andrew M. Cuomo, signed a bill that the Model Alliance fought for called the New York’s child model law, giving underage models labor protections. In the past, companies were supposed to require a work permit from models, but there were few restrictions about employing young girls who were virtually unprotected from abuse. When I ask her what she remembers about this, her most fulfilling coup, she says, “I remember standing there with Coco Rocha, and she got really choked up and said, ‘we’re changing so many lives in history right now.’” Rocha’s an active member of the Model Alliance.

Together, they’re pressing for the same rights child performers enjoy for young models who are often ill-equipped to stand up for themselves when they get taken advantage of. Many don’t speak English. “I think most people in the industry knew that there needed to be oversight and regulation, and I think that they appreciate that we’re not asking for anything unreasonable,” she says.

The organization has made noticeable changes. James Scully, a casting director on the Model Alliance advisory board, told her that this past season, he only saw two or three girls who were under 18.

“It’s not only better for the models,” Ziff says. “You also have adults wearing the clothes marketed to women, not to say that models you see on the runway are representative of the consumer, but it’s absurd that a 13-year-old girl would represent the physical ideal of women.”

You have to give her credit. She’s still working as a model, and continuing down that would have been more lucrative and less emotionally athletic than being an activist filmmaker. Instead she ventured outside an industry she felt was complicit in sexual abuse and shouldered the weight of the struggle along with her organization.

She makes a point of stressing to me that sexual abuse goes beyond Terry Richardson, who she refuses to work with. “It’s systemic,” she explains. When Ziff warned the head of her former agency that there was a photographer who multiple models accused of sexual abuse and harassment, they continued to send girls to him. “The reaction was ‘oh, that’s just him.’ He literally laughed at me and said I was being uptight,” she says.

Being concerned isn’t in style. “In the fashion industry I feel like it’s cool to be blasé, you know everything is super chill,” she says, laughing. “You don’t care about anything too much because it’s not cool to be very direct and take issue with bad behavior that in any other industry, would be totally unacceptable or even maybe criminal.”

Her organization supplies models with a discreet reporting service for sexual harassment, assault allegations, and other abuses of power.

It’s a unique culture that she’s disrupting and she’s met resistance along the way. “I remember going to meetings with top people in the industry who were very dismissive. They pretty much rolled their eyes.” But last summer, she spoke at a CFDA event with some of those people after extending the basic protections they ignored. “There was a big power shift to go from feeling like a puppet who had no voice in the industry to explaining the issues that I and other models feel really strongly about.”

When I ask her why models would be wary of demanding better treatment, she tells me that it’s difficult in an aspirational business. “There’s always going to be fear that if you assert yourself, and you make any kinds of demands, that there are 20 other people lined up to take your place,” she says. “These girls come and go. Their careers might last a couple of seasons, and then they’re kicked out once they develop hips and breasts and become a woman or they wise up a little bit.”

Having Coco Rocha as a passionate and active member has added a bankable luster to the cause. “People identify up. They want to be like Coco. They don’t want to think, ‘I’m getting screwed over or I’m being sexually advantaged by this photographer,” she says. “They want to think they’re going to be the next Giselle or Kate Moss. So to have Coco identify “down,” as it were, to support these girls who are never going to have her career and are going to be taken advantage along the way, is really key, I think, to our success.”

I ask her why such abuse happens here and overseas, and she says powerful people in fashion or rarely challenged. “There’s a huge power imbalance with people who have been in the industry for many years, who have longstanding relationships and money. I would love to be able to help forge a sense of solidarity within the fashion industry and help people on this side of the industry realize how powerful they are to make a change.”

“I get off on it. I really enjoy this work. I like feeling like I’m pioneering something. I feel like with the work that we’re doing, we’re really on the cusp of a movement that is becoming a movement, so it’s an exciting time.”

Related Links:
Mad Men Designer Janie Bryant on Peggy’s Power Suits and the ‘Pretendland’ of Costume Design
Vogue UK Signs A Code Of Conduct For Model Rights, But Is It Enough?>
Sara Ziff on Terry Richardson: “He Makes You Feel Like You’re Being a Prude”