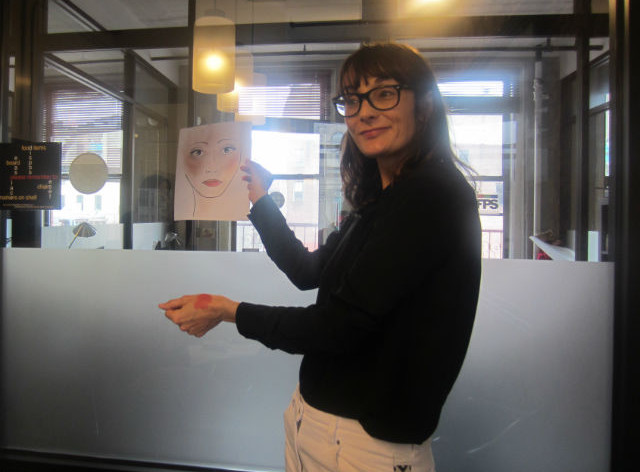 Jodie Patterson was determined to ram a wrecking ball through the barriers that segregate the way women shop for beauty. So she launched the online beauty store Doobop.

On Doobop, she sells her organic heavenly-smelling line Georgia along with brands like IMAN Cosmetics, Becca and Fashion Fair. The brands she carries focus on the now more common, but rarely mastered desire, to be inclusive. Patterson’s shopping for neglected demographics with every product she cherry-picks and tests, but she carries skincare and makeup for every complexion from light beige to deep brown. “I wanted to be that woman who spoke to beauty across cultures,” she explained. “When I think about what product works for me, I have dry skin, I have thin hair, I have split ends, I have dark circles. These are the things I want to address, not my ethnicity when I’m looking for product.” Naturally, there’s a market for her cream shadows and pressed powders, which have drawn fans like Oprah Winfrey and Sarah Jessica Parker.

I visited the Doobop office, so that Doobop’s makeup artist Angie Parker could model her technique with some of Patterson’s favorite products. Parker has makeup credits for Vogue and ELLE, so she knows makeup from an editorial perspective. That’s why she when she speaks, she toggles between speaking in beauty tutorial lingo, and acting like your girlfriend primping you for a date. For addressing darker skin, she likes to mix two tones. “I don’t know that anyone is one skin color. A very dark-skinned woman, a real true African, has actual red and yellow in their skin,” she explained. For deep skin, Parker likes to mix products. “I’m a big believer that you don’t have to have one tone, you can have up to two.”

Parker never wants her makeup applications to look like makeup, or as she calls it a “make-up whore.” Her own regimen only incorporates tinted moisturizer, lipstick and a few essentials, but she wasn’t always this minimalistic. In the ‘80s when she was into Prince and Purple Rain, she wore 25 different eye shadows. “I’d start with one and a corner, and by the end, it was like a rainbow,” she said.

Her method’s all about blending, a skill she honed at the London College of Fashion. Studying stage makeup was a turnoff so she focused on learning about fashion. “I looked at the blood, the prosthetics and the scars and said, ‘no thank you, I just want to make people look beautiful.’” In 1993, she started working with pop rapper Betty Boo and other musicians. Later in her career, Naomi Campbell kept requesting her. “She always felt comfortable with me,” Parker said. Back then, she used Dermablend on women of color, a brand Doobop now carries. “They’re great for long shoots because it lasts a super long time.”

She thumbs down her Instagram to a delicately illuminated shot of Joan Smalls looking like a golden goddess. She did her makeup for the cover of iD magazine. “She’s from the Dominican Republic, she’s mixed and she knows what she likes and is quite specific,” she said about Smalls. “This was just dewy. I did a beautiful base, so her skin looked sheer and iridescent.” Before she could start on a normal like me, she gave my eyebrows a tweeze because it turns out, you need two distinct ones. “The brows are a very important part of the face,” she said. “They frame it.”

1. To start, she tapped RMS Beauty “Un” Cover-up concealer onto the sides of my nose with her middle finger like she was banging at a dead piano key. It melted into my skin for a natural finish. “It should become a part of your face,” she said. She worked down the center of my nose and under and around my eyes to get rid of my basic blemishes. “A lot of women don’t need a full base.”

2. She used BECCA’s Perfect Skin Mineral Powder Foundation in “Nude” along with a BECCA’s bronzer, Shimmering Skin Perfector Topaz, on me. (I bought a Becca shadow palette five years ago in Berlin, and I was excited to see the brand was still around.) She brushed both powders under my cheekbones in tiny ovals, contouring a little around the apples of my cheeks. She finished by dusting the bronzer under my chin onto my neck. “I want it to be malleable and dissolve because it creates a much lighter feeling.”

3. She rolled BECCA’s The Ultimate Mascara wand upward on my lashes in little sections for a light coat. “Be careful not to use too much,” she said, “but use enough product that it actually creates a lift.”

4. For eyeliner, she usually does a secret line penciling in the black in the nude spots between the lashes, but that day, she created “smudgey action” over the line with BECCA Automatic Eyeliner.

5. She did a smokey eye with light brown shadow from the the Becca palette “Galactica,” keeping the pigment close to the lash line.

6. She dotted BECCA’s cream shadow, “Magnetic” on as a highlighter above the cheeks, working down the bridge of my nose and under my nose.

7. She covered the darkness near the upper sides of my nose with more concealer, “That can get purple because that’s where the blood is.”

8. For my cheeks, she smoothed on RMS Lip 3 Cheek “Modest” from a pot. Her method felt liberal and painterly, but the results were seamless and precise. “Every woman, no matter what skin tone should have sun-kissed cheeks or some bit of color. It makes everyone look healthy and vibrant.”

9. For lips, she patted on the same stain onto the cupid’s bow and had me say ah, “like the dentist,” she said laughing. “You’re so much better off with your finger than a brush. There darling, not too perfect,” she said. “Now you’re ready to fight the world.”