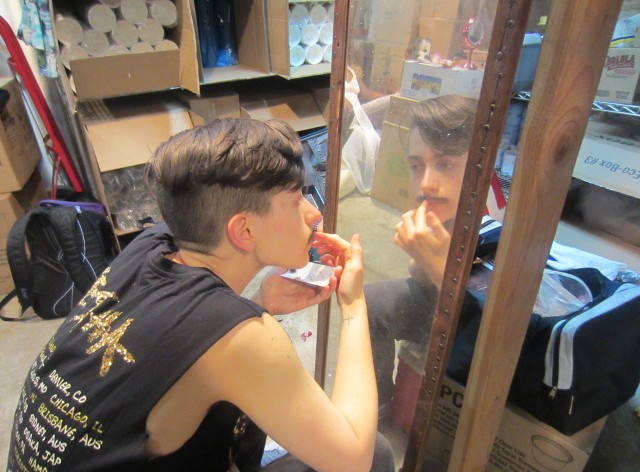 When I got to the Outpost Lounge in Brooklyn’s Clinton Hill for Switch N’ Play’s Open Drag Night last Saturday, I was early. I wanted to see the the drag kings get ready.

That night, kings would be binding their breasts and stuffing their crotches among the olive oil drums and cases of wine, but for now, there was only one female, furiously rubbing makeup onto her face. She was swirling foundation into her temples, and her hair was pulled back in a stocking. Before I could talk to her, more performers came in to hug and admire: “You’re gorgeous! Hey, beautiful. I like your mustache. You look beautiful. You have the best facial hair tonight. Wow, you look so so amazing!”

They were getting ready for the show, which gives new drag performers the chance to workshop untested material. The performances were explosive three-minute lip-synched songs. In that space of time, they became bolder, more self-possessed versions of themselves. The audience threw cash tips at them. (The tips benefit LGBTQ organizations.)

The first performer I saw piling on the product was Ali Hoyt. She was doing Bio Drag, which is heightened feminine drag. At midnight, she performed a mashup of “Drunk in Love” and “Pour It Up.” She threw money at the audience even though it’s usually the other way around because she’s a bad bitch like that.

Hoyt, a performer in from Manhattanville College, helps other students fairly new to drag. They called her their “drag mom.” “We’re on a drag high so I’m like ‘let’s perform again!’” Hoyt said, as she applied highlighter to bring her already-high cheekbones further up on her face. Her striking drag character, Aqualius, was a slowly emerging portrait sketched in heavy duty make-up, which she smoothed on like frosting.

“The more it feels like there’s a cake on your face, it’s a good thing,” she said. “You’re basically creating a new face and you build and build.”

Brushing powder on her forehead, she explained the vision. “I already have feminine features, so I have to accentuate them.”

She covered her eyebrows with wax from a stick, and drew on even more dramatic brows with a brown pencil. Then she thinned her nose with a darker powder.

Ellie Desautels, another student, was patting yellow duck tape over her breasts and securing it with adhesive spray. “How do they look? Flat enough? I get blood blisters from this shit, do you see that purple spot?”

Desautels needed the tape to become Otto, her drag persona inspired by ska bands. “I used two sports bras last time, but there was still kind of booby.” The way the tape was sticking was uncomfortable, so she dusted on some baby powder.

She made her goatee with an eyebrow pencil kit. A sock wrapped in duck tape wrapped inside another sock was a substitute for a package.

“I dealt with so much bullshit and I was over it,” she told me. “Otto, my persona, is the symbol of how much better I am once my confidence got way back up, and now it’s better than ever. After the first show, a few days went by, and I didn’t put on any makeup, and I was like, I miss Otto!”

She explained that when you’re a drag king, you have to think about what you’d be like if you were born a boy, and she imagines Otto as her twin brother. The narrative arcs of Ellie and Otto aren’t so opposite. “I don’t think I’d be much different. I’ve always been a tomboy so I wouldn’t be that much different except for my looks.” Otto wrapped a white bow tie around a turquoise, collared shirt with a tropical bird print.

The kings were all talking about how they want the summer to come already. Later, Small performed in the boys of summer finale to a mix of Beach Boys, LFO, and Cory Simpson, wearing something out of the ordinary: shorts — so they needed to shave.

Small explained that it’s about pushing the line between feminine and masculine, and that people know much less about drag kings than they do about drag queens. “A drag king can become whoever they want to be,” Small said. “There is no set type of drag king.”

“My drag persona is my gay boy masculine,” Small said. “Out of drag, I’m very much femme gay boy. I only came out five years ago.”

Small, whose drag icon is Adam Lambert, canceled on his first show three times because the facial hair wasn’t perfect yet. “The first time was nerve-wracking, but afterwards, I was like, oh my god, I want to do it again!”

Fellow Switch N’ Play king K. James kneeled in front of a dirty mirror pasting their mustache on slowly with spirit gum. “Normally I’d do a bigger one, but I don’t have enough hair.” He speaks quietly, and his hand is steady.

Every day, they wear flannel, jeans and t-shirts, but for shows, they wear cutoff t-shirts and the tightest pants possible. For this show, they wore a Kesha shirt with flame accents.

“My girlfriend calls me a shy heartthrob,” they said.

James opened the show with an in-your face confidence as they danced to a jam for the ’90s fangirls and boys in the room N’Sync’s “Digital Getdown.” Appropriately, it was a sendup of Grindr and Tinder. But later on, out of performance mode, they mopped up fake champagne from the Kanye West bit. The girlfriend, Miss Malice, asked them to give the audience a look at his more interesting side. As the crowd bugged out, he did, but only for only a moment.