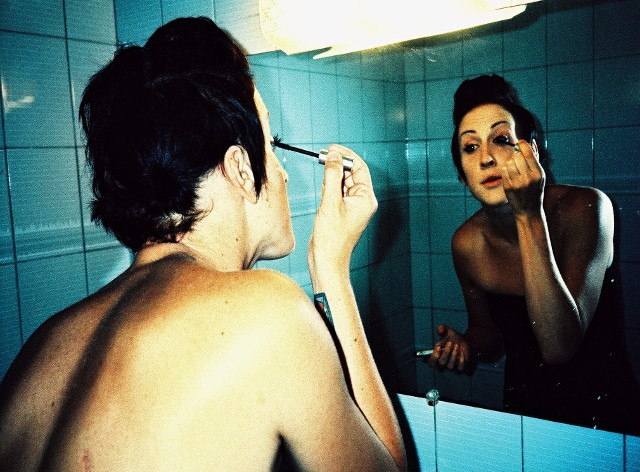 You won Heartthrob of the Year at the FPAs. That’s a pretty cool title, better than prom queen.
Yeah, I was also pretty awkward in high school and there was no chance of me being prom queen so that’s a nice way of thinking of it…that I got it in the after years.

You’ve talked about finding sexual agency arousing. What does that look like in a video?
There’s a difference in a performer who is engaging like she wants to be there and that she feels good in her body and in her experience. With other performances, it might be less clear or maybe the performer is not as present in what they’re doing, but I really think it’s intangible. The obvious criticism is, “I can’t relate to her, she looks like she’s having really fake moans and noises. It looks like it’s happening to her.” That’s really where the difference is, that the experience isn’t about being really turned on and genuinely enjoying it.

Belle Knox talks about her work being gratifying. Why is tough for people to view sex work as a job?
What gives people pause and blows their hair back is that a woman in sex work is genuinely enthusiastic about what she’s doing. It kind of freaks people out because they think she’s obviously coerced or she’s duped, and a lot of that has to do with existing societal shame and the larger norms publicly that we have in place with religion and politics in the United States. The way we were socialized to feel about sex work, and female sexuality is an embodiment pertaining to the the politics. Men can say, “I’ve fucked this many women,” and they’re awesome and they’re this Casanova while a woman who has been with many many men…she’s a slut. It’s a deeply ingrained way that influences and informs how we look at sex workers. This is pretty controversial, but sex trafficking is a hugely important situation that needs attention brought to it. With more and more focus on that, it becomes less and less clear. But there are distinctions and there can be positive experiences.

What are some of the assumptions that you believe are incorrect?
People assume there’s a pimp or a male director or that there’s some lack of agency. I definitely think that’s shifting, but it’s so so deeply ingrained in the way we’re raised and what we’re taught about sex at a very young age that it causes a shift. There’s always this inherent stigma.

Would the Belle Knox case have played out differently if she were male?
It would be a non-issue if she were male. Media just highlights that when a female sex worker like Belle Knox is outed as a performer, she’s got to come up against slut-shaming and people digging into her history and her past. Number 1, if it were a male performer, I’d be hard-pressed to find that it would threaten his figure or his education or job status. It wouldn’t make any kind of news. Men are supposed to be sexual but women being sexual, that’s uncommon. Women are supposed to have sex inside a bedroom and be monogamous. It’s still shocking when they’re not. It’s still shocking and really newsworthy.

How could the news stories affect her career prospects?
Her case is a really an interesting one. She has really presented herself in such an intelligent and classy way throughout all of this. She’s really situated herself on the side of her debate that my hope for her is that she’s provided opportunities. She’s been very smart and articulate when she combatted all the shaming that has happened. I really hope it won’t affect her prospects. I hope she’ll more likely find her way with jobs and things and relationships with people who are supportive. I’ve been very lucky. That’s been my experience. I could have easily run into problems of not being hired or people shaming me. It was a combination of me having great experiences and policing myself with jobs and spaces that I knew I’d be much more supported in.

How did you do that for yourself?
After a few years of being in the industry, I was already working in sex education and in social work and so I was really about to go to grad school. I looked for places that would be open to what I’m doing, and I was really lucky. I never wanted to work somewhere that I thought would shame me. The hard reality was that I never wanted to work somewhere that wouldn’t be open to a sex worker anyway so even if I hadn’t started in the industry, the spaces I picked, politically, were open minded to the adult industry.

There’s been a backlash from sex workers who think Belle Knox is too young to be a poster girl for their industry. Where do you stand on that issue?
Her age is definitely a challenge. It can be hard for a performer who has been in the industry to see somebody who has come up this way with little experience. If I could choose someone to represent the industry, I would say continue to talk to her and here’s five other people I would love for you to talk to. Any specific marginalized person doesn’t necessarily get to pick who represents her or who are mouthpieces. For me, I’m always happy when anyone with intelligence is representing sex work authentically regardless of age. I like when they’re talking about what they like and what they’re doing and give people a household name and keep combatting stigma and shame. Some positive press about people who are well-educated is always better than people mired in their ideas. I don’t know where it will take her. It’s unclear how long she’ll be in the industry, but it’s exciting that she has nothing to be ashamed of. She’s saying, “I’m paying my way through school and it’s about smart people making choices and having agency.”

But not without enduring some social shame. Have you ever been through anything like that?
There have definitely been moments. I remember feeling really good about this piece I wrote, and then I remember meeting a new friend. He had mentioned he’d read it and thought it was super smart, and he asked if I’d read the comments and I said no, and he’s said, “well that’s great you probably shouldn’t.” A couple of days later, I do because now I’m curious right? That was a moment for me. I’m very lucky that I haven’t had people say those things to my face. The internet is always this big space to be a jerk and say all the terrible things you want and you don’t even have to put your face out there, just your dorky avatar picture so you don’t have to be accountable. It was actually really good that it didn’t upset me in any kind of major or deep way, but it did give me a moment of yeah, this is real. If I were in more spaces that were challenging and I put myself out there more often, that would probably happen more often. I get challenging questions, but nobody is verbally assaulting me.

What was your favorite video you did?
Wow, no one has ever asked me that. My favorite experience is when I walk away and the work I’ve done is with Taormino. Her sets are really great. The people I shoot with her are really fun. I like the way she can structure shots. She’s pretty high on my list. She’s a wonderful friend and a talented person. I like what she makes. I’ve done four films for her.

Are there boundaries in terms of what you choose to reveal about what you do?
It’s really important for me to have a civilian life outside of porn. It’s very grounding to have friends, much like performers who are non-pornographic, and to have a normal life. In terms of whether I discuss things with them, that depends on them. I take my cues from them. When I talk to people about my work, I am basically talking to them about sex. I’m not going to lead with sex as the topic and wait and see how comfortable they are with sex. I take my cues on how much open banter we have going. If I’m at a cocktail party in San Francisco, and they’re complaining about all these minorities in the neighborhood, that’s not someone I’d talk to about porn. Whereas someone who works in social work or says, “I’m a therapist,” then I’d say “oh great, you may be interested and won’t find my work creepy or be affronted or shocked.” I probably only actively talk about it with new people 10% to 15% of the time and then with people that I know that are a part of my life, I can say “I went to work today, and I was on set for five hours.” Then it’s second nature.