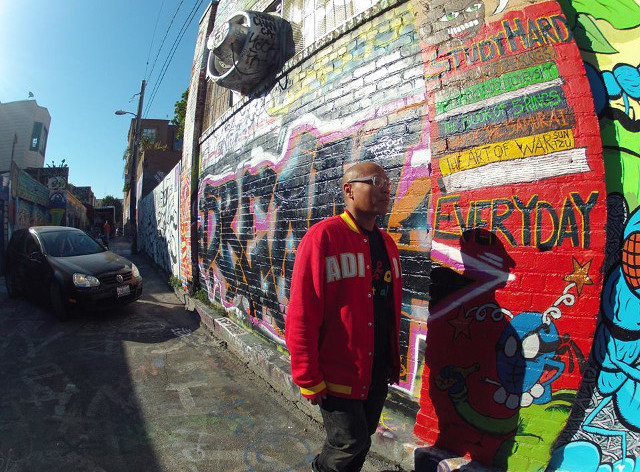 DJ Neil Armstrong, Jay Z’s former touring DJ, is a global ambassador for adidas, but he wants to stress he wouldn’t have that fancy title if it weren’t for Run DMC. In honor of adidas getting some major fashion airtime with its new couture partnerships, we got in touch to learn about the evolution of the brand. He phoned us from Tokyo, where he’s touring, right before he went to bed to talk about the small German town where adidas started, the cross-pollination between streetwear and fashion, and how hip-hop girls no longer dress like dudes.

What made Run DMC’s partnership with adidas significant?
I think the most important thing about Run DMC’s relationship to adidas that people don’t know is that Run DMC were the first group that had a relationship like that. It created the official relationship between streetwear and hip hop. There was no Supreme. There was no “whatever.” Run D was the first non-athletic entity to ever work with an athletic sneaker company. They’re the ones who started everything. They were wearing Adidas before getting sponsored. They were like “We’re wearing your adidas. We’re getting a million people to buy them. Give us a million dollars.”

How in tune with hip-hop was adidas?
What people don’t understand is that adidas was started in a little German town, I can’t even pronounce the name, everyone calls it “hertz-o” [Herzogenaurach]. It’s the most opposite thing you can think of to anything street. I’d be surprised if there weren’t livestock running around in the backyard. Whoever was at adidas at the time was so smart. They could have been like, “what is this rap garbage? I can’t even understand these people.” Instead they were like, “we’re going to work with this guy.”

What was an infamous moment from those days?
Run DMC was at Madison Square Garden and said “put your adidas up in the air,” and 10,000 plus people did it, and it was because of Run DMC.

How did Jam Master J pave the way for you or someone like Pharrell?
Without that relationship, there would be no Kanye West and adidas, no Kanye West and Nike, no Pharrell and adidas. It’s crazy. Adidas is bringing all that back. Kanye signed with adidas and so did Nigo and Pharrell.

Did you anticipate adidas’ partnership with Pharrell?
If you look back to 2004 and 2005 for example, the basketball (performance) sneakers at the time, maybe they did like, 3 different color ways at most. They didn’t do a bunch of different color ways, custom personal editions, versions for Christmas, for the Grammy’s, for Valentine’s day etc. etc. Nowadays, that is really a common thing, for a single silhouette to come out in like twenty different versions in the same year. That type of mentality comes from the lifestyle sneakers, that’s a lifestyle sneaker collector thing. Kids who collect sneakers wanted different colorways, wanted a story behind the kicks they were collecting. Basketball players just wanted to play in them. Performance provided the function. Lifestyle mentality brought the style. So now, bringing someone like Pharrell into the fold, who is a style icon on top of being a musician, its not surprising at all.

People have been talking about the new couture collaborations. Would you say the brand still has a hip-hop image?
I do believe this is a universal truth and it’s going to be this forever. Hip-hop keeps changing constantly and evolving, but whenever you get down to brass tax and say, “I need a picture that looks like hip-hop,” there’s going to be a graffiti background, a B-Boy stance, and he’s going to be wearing an adidas tracksuit and adidas shell toes. I’ll bet you money if you ask an ad guy or a graphic guy to make a hip-hop picture, that’s what they’ll draw.

Why is that when there are so many hip-hop looks?
Because those are the uniforms that have just been made. If you look at what Grandmaster Flash wore, he wore leather rocker stuff like a black rocker superstar, but that’s not the mental image you get, and even when I was into hip-hop, I wore Timberlands and Polo and blah blah blah, but that’s not the lasting look.

How musically indebted is the success of the company?
I’ve been exposed to the to the global market, and for their football or soccer sneakers in Brazil, there are tons of kids who wear those silhouettes in Australia and in Europe. They don’t wear Superstars because of Run DMC or 2 Chainz or Missy Elliot. It has nothing to do with music. I don’t really know the numbers, but that’s the thing about adidas. They’re as German as German gets, so to say that their whole thing is because of hip-hop, well that’s a ridiculous statement. The guys who are handling the Originals side, they are smart enough to know to work with David Beckham and Pharrell to maximize their exposure.

Years ago, adidas joined up with Yohji Yamamoto and Stella McCartney and now there’s Raf Simons and Rick Owens. What do you think of that?
I think these new partnerships on the lifestyle side are good, you know I just love how much adidas understands the culture. They have the forward-thinking to work with those types of guys.

I remember when Kate Moss posed naked for French Vogue in adidas.
Of course. She was wearing the Stan Smiths, and now they have Topshop stuff, and that’s great. The streetwear culture and high-end fashion crossover has become so common. I’m not really one of those dudes so, just to be honest, I don’t pay too much attention to the high fashion, but I love the Y-3 stuff. I only look at the guy stuff, but they have Stella McCartney, and they have Opening Ceremony for both guys and women.

Do you know female sneakerheads?
Nitrolicious is a girl who did a blog that really blew up. It’s one of the few that caters to the female fans. She has a site with the latest kicks, the Jeremy Scotts and also super expensive purses.

How has style evolved for women in the hip-hop scene?
Well what’s kind of cool is that when I was around in the ’90s, hip-hop girls… they dressed like boys. Aaliyah would wear boys’ clothes. She made it sexy as hell though. The girls in my school, they wore Tommy Hilfiger, baggy jeans, and Timberlands. Now a lot of the products are more feminine and form-fitting. They show off the beauty of women a lot better. Adidas with their line, that’s part of their initiative. That’s definitely cool. I was just talking about that with my friends, how in high school when I was supposed to be at the height of my dating, the girls kind of dressed like dudes.

What’s your personal style now?
I like classic stuff. I’m a fan of the older silhouettes. I also wear the performance kicks, the Basketball sneakers, crazy 1’s, crazy 8’s. John Wall from the Wizards is getting a new sneaker soon. I’m also a runner, so I wear the running kicks, the Boosts, the ZX series, and the new ZX Flux stuff that they just dropped a couple of days ago…those are amazing. In my case, the clothing made the man.

What do you think of Jay Z’s style?
He is arguably the greatest MC in hip hop history – like, twenty years from now, I have no doubt that he will be called like… the Elvis or Frank Sinatra of hip hop. His ability to have longevity in this game is amazing, and a large part of hip hop is personal style. That whole style thing, he’s got that covered.