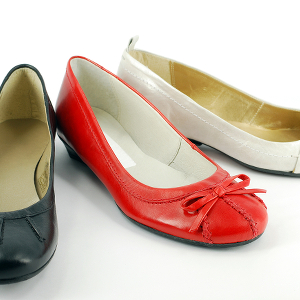 A few weeks ago Elle.com editor Lauren Sherman announced she was swearing off heels forever. Well, at least until they come back into fashion again. I get the appeal of certain breeds of flats: Flat shoes are comfortable, they don’t usually cause permanent physical damage, they don’t usually cause temporary mental damage when you narrowly avoid eating shit while crossing the street, and Alexa Chung is a fan. She’s not the only one, either. Sales of flats have gone up 4% in the last year, and Spring 2014 saw the return of everything from Nike Flyknits (on the crowd) to bejeweled Teva-and-sock combos (on the runway).

I can get behind Flyknits and Tevas. I’m even partial to socks and jellies, or shower slides and leg warmers, or any of the other fugly footwear combinations that have surfaced in recent months. Tevas know they’re not conventionally beautiful. It’s just not in their DNA structure. But are they going to let that regulate them to wearing Velcro and embroidered flowers? Heeeell no. They’re stepping it up in shiny gemstones and expensive fabrics as testimony to the fact that looking good is feeling good. It’s not what you were born with but how you choose to present yourself (isn’t this basically out motto, as fashion people?) And who are we to knock them down in their smooth black leather? Who are we to say that fluffy Céline insoles belong solely to the upper echelons of the footwear hierarchy?

But I just can’t with the obsession with ballet flats. I have tried to love these “ladylike”, utilitarian shoes, but we simply do not mesh. I’m not talking man-style lace-up oxfords or luxe velvet loafers with block heels and tassel trimmings, or all the other types of fancy non-heeled footwear Sherman is probably currently enjoying a nice honeymoon period with. I’m referring to any and all relatives of those souped-up Michael Kors monogram flats with a big jazzy logo on the toe part. “Flats” in their simplest, most annoying form. Like Jacob Black and Bella Swan, our relationship is complicated and I’m just not sure we can ever really be together.

Our differences first surfaced at around age 13. While all the Ja’mie Kings were writing fake letters from their moms on torn-out sheets of A4 exercise books excusing them from wearing the required footwear in favor of flat, black slipper-shoes, I secretly loved the chunky lace-up required footwear. School shoes made me feel more confident and more intelligent, perhaps in part due to the fact that they actually made me taller. I attribute 25% of my passing grade in physics to the fact that I usually showed up for class, and the other 25% to my shoes. A flagrant exaggeration, perhaps, but many women do link success in the boardroom to the wearing of empowering underwear…

Perhaps this is the reason I have yet to find a pair of flats that achieves similar results. Once you are used to wearing shoes that come with an intrinsic boost of height and/or confidence, whether it’s a pair of shit-stomping boots, defiant old Chuck Taylors, puddle-proof T.U.K. creepers, or heels that elevate you an extra four inches, it’s hard to put on a pair of boring old ballet flats and think, “gee – these are just what I have always been looking for.” People think heels are cruel, but ballet flats are the real Mean Girls. Their entire existence is based on lies, purposefully connoting images of grace and refinement, when in reality they just sort of flap around taking advantage of my childhood dreams of becoming a ballerina. These things have become so ubiquitous that I have even seen them in vending machines, which is kind of perfect, because like eating unheated Pop-Tarts at the Laundromat while you wait for you spin cycle to finish, wearing sock-shoes is one of the ultimate signs that you are beginning to fail as a human being.

I’m sure a fashion editor isn’t swanning around, pissing off ballerinas everywhere by venturing beyond the gymnasium in shoes that actually do contain less fabric that some of my socks. But many, MANY people are. And it is not to be condoned. Ladies, we are better than this! It’s time for us to rise up, literally, against boring, unflattering flats, whether it’s in Chelsea boots or brogues, Valentino Rockastuds or Birkenstocks.

And hey, Lauren, if you are looking for something to do with your Céline curved-block heels, I’d gladly risk stumbling every couple of blocks for them.